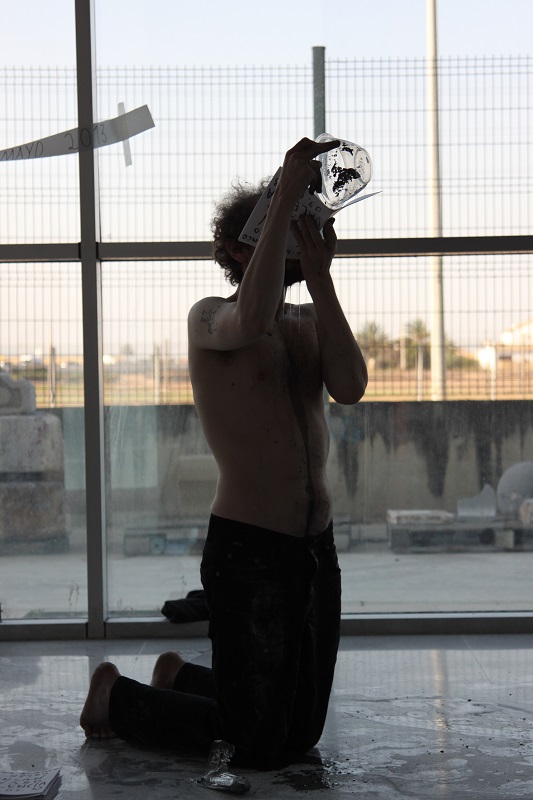 I made my first performance in Spain, and gave it a title in Spanish. I know hardly any Spanish, but I know enough to say “black and white wine”. And that very much sounds like a Duncan performance. So I decided that straight off, but ideas were slow to develop much beyond that since my head was so full of the other performance I was planning, my large-scale thirty-third performance in Brighton, “Old Tricks”.

Once I had made my old tricks, I got down to work on my vino blanco y negro. It seemed to be a bit more of a push than it should have been. I decided to make a book to accompany the performance, partly to help me to get a grip on it and give me something concrete to do with my hands while I waited for my ideas to come into proper order in my head, and partly to give myself something to talk about at the conference (I had to talk about how I prepare for performances, and so I thought I could talk about how I sometimes prepare for performances by making books). For really no better reason than that I couldn't think of anything else to put in the book, I filled it with sketches of my tentative ideas for the performance (most of which made it into the piece, one or two of which didn't), and I also put in a copy of a Murillo drawing (for one reason and another) and a few notes in Spanish made with the help of a dictionary. It was quite a nice book though, and it did help me to get my ideas straight. I decided to use the books (I printed fifty copies) as props in the actual performance, and to try to make a more thorough and better job of it than on the couple of previous occasions when I had tried doing the same thing.

So I went to Spain, to Valencia. The weather was great, the food was phenomenal. The conference was packed into one tightly-scheduled afternoon. There was a lecture by a Spanish artist, Margarita Aizpuru; then I and then a Swiss artist Claudia Bucher made performances in a vast gleaming corridor; then the local artist Santiago López made a sound-sculpture installation-performance outside; and finally all four of us spoke in a classroom.

Mine and Claudia's performances complimented each other very well, as if we had deliberately planned them to form a pair, although of course we hadn't having met only the day before and discussed only the odd peripheral detail. (Maybe Álvaro who curated the performances knew that this was likely to happen.) I used black and white materials and Claudia used red and white materials. I was dressed all in black and barefoot, Claudia was barefoot and all in white. We both started off tidy and got messy. Claudia made strong individual images while I spread out a loose tableau. She made direct eye contact with the audience, I performed as if alone. She cleaned herself up afterwards, I went on to Santi's performance and to the talks as I was, covered in glitter, sequins, cava, sand, charcoal dust, and talcum powder. I liked very much how all of the differences and similarities in our two performances played against each other.

The corridor we were performing in was really something. I have performed in a corridor once before (my thirtieth performance) and that was great, and this was great too although the corridors could hardly have been more unlike each other. This one was like an airport. It was vast, the floor polished to an almost dizzying shine, one side was solid wall and the other all glass, and a series of columns divided each side up into a long series of identical bays. I performed in front of the glass (Claudia performed in front of the wall), choosing a bay with a particularly beautiful view through the window of blocks of stone placed on crates, some of them worked into with the beginnings of abandoned sculptures; beyond that was a piece of grassy waste ground over which a man with a metal detector was roving; and right up close just the other side of the glass pretty little birds now and then could be seen hopping about – I'm not sure if any were there while I was making the performance, I hoped that they would be there. Also in this bay there was a small hook that had been left in the side of one of its flanking columns, which gave me a solution to something that was bothering me with my performance as I had it planned out, that is what to do with my black ribbon that I wanted to use for its sculptural and colouristic properties but for which I hadn't really come up with any really compelling action function.

I started with all of my many materials lined up neatly along the narrow sill running along the foot of the window. I first took a container of talcum powder, rubbed some into my hands, and then shook out big clouds of it all over the area I would be performing in. I hadn't been able to track down in Valencia in the limited prep time available any really expensive talc but still it smelled good. Then I wrote out three scrolls on a till roll (I used the stack of books to rest on) as if it was the opening title sequence of a film (with the talc clouds thus forming the pre-titles action) - “VINO BLANCO Y NEGRO” and then “DE DUNCAN WARD” and then “JUEVES 09 DE MAYO 2013”. I taped them up onto the window behind me. I popped open the first bottle of cava and poured some into a clear plastic bowl, and I went down on my belly and guzzled the cava from the bowl. I took off my t-shirt, then I took a sponge and plunged it into the bowl and squeezed the sponge out trying to catch the cava in my mouth. I topped the bowl up, and I put some sticks of willow charcoal inside a piece of white cloth and I bashed it with a beautiful stone I had found in the university's gardens to turn the charcoal to a black dust. Some of the particles escaped through the thin cloth to float up in little black puffs which wasn't planned but which was very beautiful. I tipped the charcoal dust into the bowl of cava and stirred it together using a palm leaf (also found in the university's gardens) to form the vino negro. I showered in the blackened cava, plunging the sponge in again and squeezing it out over my shoulders, repeating until the bowl was all used up. I opened the second bottle and poured out a clean bowl of cava. I drank some, using one of my books held in the palm of my hand open at the centre pages as a funnel for the vino blanco. Then I pounded some more charcoal dust, turned the cava black, and repeated the action of drinking through the funnel except that I kept my mouth closed so that the vino negro flowed slowly down my chest until the bowl was drained. By now the floor was starting to look pretty good with various scattered materials, black and white, dry and wet. Now I took my 100-metre spindle of black ribbon, looped it around the hook, and sat down with the loose end of it, slowly pulling out lengths of ribbon and snipping them off with the scissors; the spindle jumped and rolled and danced about very nicely with the tugs. I was intending by this action to end up with a big mass of black material to lie down on, but the lengths of ribbon curled back up rather too tightly and so didn't really yield enough. Still I spread out what I had as best as I could, and put down a black flannel as a pillow, and then I brought over the remaining materials and lay down. I now took a series of white paper and plastic bags, filled them with various things (some I had filled in advance), and held them in my left hand above me, taking the scissors in my right hand and making cuts in the bags in order for the contents to spill down over me. In this manner I spilled over my chest sand, silver glitter, and vino blanco. Then I cut off a strip of the flannel and put the main part of it back under my head and the smaller part over my eyes as a protective shield, and then I spilt over my face black and white sequins, talcum powder, and vino negro. I got up and spent a moment clearing my eyes, then put my t-shirt back on. I picked up one of the cava bottles which was still half full and swigging the vino blanco went off to retrieve my shoes. The audience helped themselves to the books, and I shared the leftover cava with the few of them that were happy to drink from such a dirty bottle.