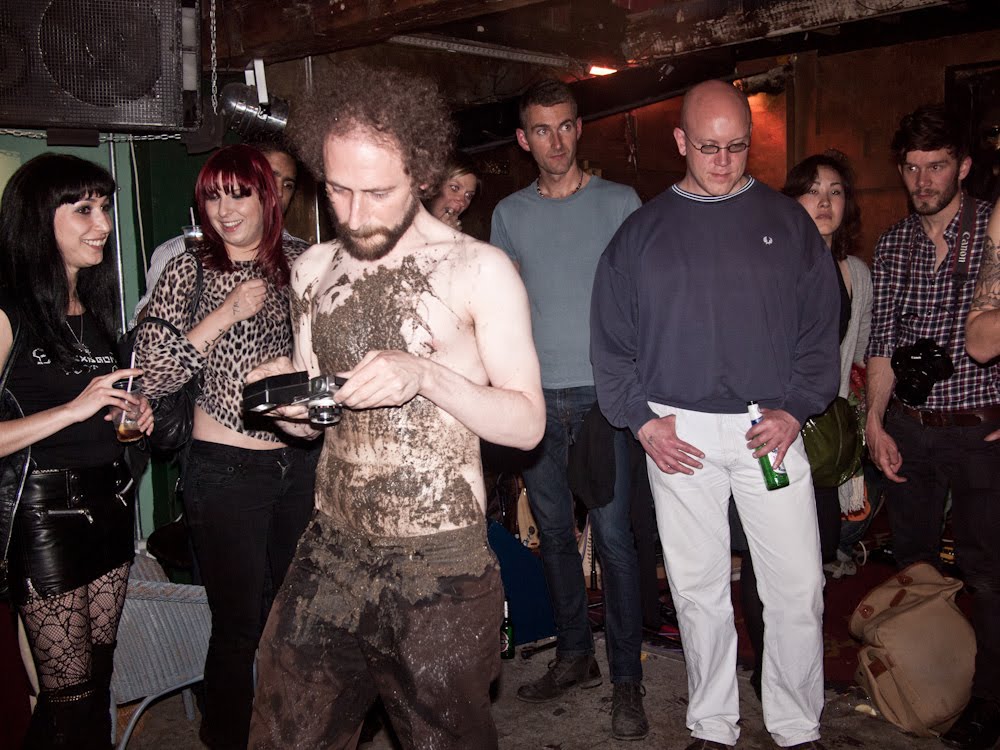 This performance took place at a paganistic Mayday-themed event in a tiny and packed basement, with performances, bands, and DJs. I was the last performer, on at about twenty to midnight (my latest start to date). It had not been decided in advance whether I would perform in silence (as I usually do) or alongside the DJs; we would see how things looked when the time came. In the end, the party when the time came was in full swing, and so immediately as the last band finished myself and a new DJ both began our things at once.

And it was amazing! Because the DJ started playing a set of 1960s girl bands – the first song was “I’m Your Venus” – the perfect soundtrack for my performance. I set about my actions in a quicker and more slapdash manner than I normally would, to fit with the music. I first cleared a space to perform in by stepping into the middle of the crowd and flapping a plastic sheet in the air and laying it on the ground. Then I walked round and round its perimeter puffing clouds of talcum powder roughly into the air. The end of “I’m Your Venus” synched perfectly with the end of the talc action, then another great beat pop song came on (I didn’t know this one). Overall, my performance matched the space of four of these songs, so that’s about ten minutes total, and with every change of song the mix seemed to come just at a shift in my actions, as if the whole thing had been worked out in advance – that made me very happy, it seemed quite magical. I brought the rest of my materials onto the little stage I had made for myself, mixed water with black ink in a bowl. I stirred the ink into the water using a fringe squawker from a pile of them that I had tipped out onto the floor. Then I used further fringe squawkers to flagellate myself with, after dipping their thongs in the ink. I flagellated myself over the back, chest, and shoulders, and the girl band soundtrack was really perfect for this. The ink ran in beautiful black rivulets down my torso. Then I opened a jar of ink-blackened sand that I had saved back from my preceding “Causality” performance, and poured it into a Fortnum & Mason bag. I added the ink and water from the bowl. I made a slit in the bottom of the bag, leaned back and squeezed out the wet black sand over my chest. Then I took a camera (an Olympus Trip camera from the 1960s so even that matched the music), and took some photographs of my action debris. Finally I put my shirt back on and that was the end of the performance, just as the fourth song came to an end.

The piece was going to be called “Mayday Celebration”, but I changed the title afterwards to “I’m Your Venus” as I was so happy about the music. The music actually made the piece much more of a celebration than it probably would have been, it loosened my style a great deal, and I think the music changed the way in which my images were read, actually bringing them closer to the meanings I wanted them to have. I am always talking about joy and ecstasy and excitement in relation to my work, but I don’t know if these things actually get conveyed so much with my performances usually being fairly quiet and obscure. It is true that the kinds of joys I am working with are perhaps obscure ones, but nevertheless it felt good for a change to be more blatant. In addition to acknowledging my pleasure at how the music had worked, the new title is a significant one in relation to the fragmented torso, which is probably the biggest motif running through all my performances. So with this title and soundtrack, and these actions, my torso is having to play the simultaneous roles of classical ideal, flesh to be mortified, and blank canvas.