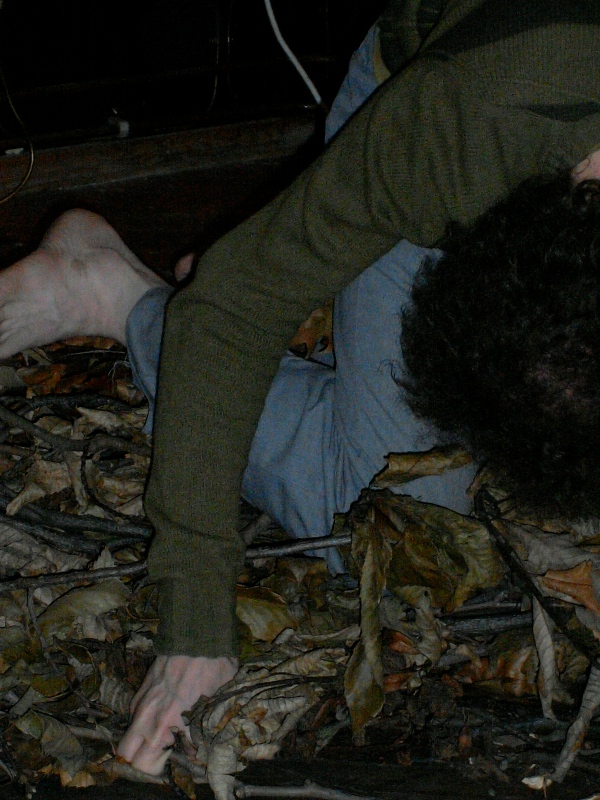 I used also to make music, and had a short track of amplified triangle music, recorded under my solo guise of New Low, included on the 4th Harmonic compilation “Our Pheromones Are All Loose”. The piece had been recorded on the afternoon of my twenty-seventh birthday three years before.

Asked to perform at the launch gig, I thought about what I might do and little by little arrived at the idea of making not a musical but a performance art piece. I made several trips to Greenwich Park, collecting branches. I took them all to the venue and arranged them into a thick nest on the small “acoustic stage”. I placed a potted, dead holly bush behind the nest and hung a triangle from it.

I gave an introductory speech explaining how the piece was intended to be a homage both to Saint Benedict and to a favourite, triangle-shaped, tree of mine a short distance from the venue. (I didn’t mention that it was also a homage to Giovanni Pico della Mirandola.)

“Soon the devil brought to the holy man’s mind the image of a woman he had once seen, and he was so aroused by the memory of her that he was almost overcome with desire, and began to think of quitting his solitary way of life. But suddenly, touched by the grace of God, he came to himself, shed his garment, and rolled in the thorns and brambles which abounded thereabouts; and he emerged so scratched and torn over his whole body that the pain in his flesh cured the wound of his spirit. Thus he conquered sin by putting out the fire of lust, and from that time on he no longer felt the temptations of the flesh.”
- Jacobus Voragine, “The Golden Legend”

“If you see a man given over to his belly and crawling upon the ground, it is a bush not a man that you see.”
of the flesh.”
- Pico, “On The Dignity Of Man”

I climbed into the nest and for a couple of minutes played a droning overture on the triangle, to get me into the mood. Then I put the instrument down and plunged into the nest, writhing in the branches, rolling around and snapping the twigs, pulling it over me and burrowing down inside.

It felt really nice wallowing in the nest, and the snapping wood made nice sounds. I had wondered if I might enter into an ecstatic state in there (all of this was, at the time, intended as a kind of research for a book I was trying to write then, called “Ecstatic Notebook”) and this did start to happen a little bit. At one point I felt a broad smile open up over my face and I, sorry to say, at first attempted to suppress it; but a second later I remembered not to cover it up and let it break out again.

Although Benedict had rolled in thorn bushes (and I visited them in Subiaco and can testify how sharp they remain, even 1,500 years later), I snipped the dangerous prickles off of my branches ahead of rolling in them. My tastes are milder than his. I picked up a few scratches but nothing more.

Fairly soon afterwards I gave up both music and writing to concentrate solely on art.

Young Mountains published a book containing photographs of the performance (badly photocopied even to the extent of homaging Kasimir Malevich’s “Black Square”), explanatory quotations, a transcript of the introductory speech, and a CD containing audio recordings made throughout the day, in an edition of 25 copies.