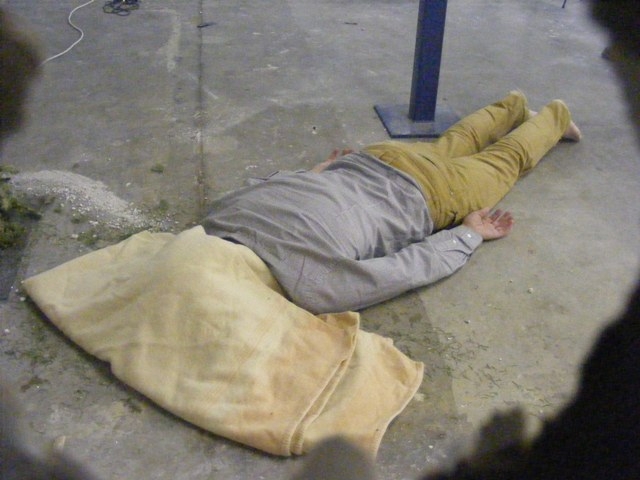 A 24-hour event at the recently opened ]performance space[ in Hackney Wick (9am – 9pm), I got there late afternoon, finding the place dark and smoky and quiet, three performers had been rotating since opening, I was the fourth to appear.

I had planned to make a piece of about 20-minutes duration which I would repeat two or three times at various points of the afternoon and evening; but, performing alongside the other artists, I soon found myself adjusting to their slow, long rhythm, and drew out my actions into a single performance of about ninety minutes during which I repeated the same sequence of actions twice over, organising things so as to end up, at the end of the first sequence back at the same point I had began at, and so be ready immediately to do the same things over again. I thought this would be a good way to approach a durational event with the audience coming and going, so people might potentially catch the same moments from different viewing positions, or catch different moments of the performance from different renditions and so be able to piece the whole thing together.

Another reference to point out is to the Eric Bainbridge sculpture “The Mind Of The Artist At The Beginning Of Time” (1996), which was among the pieces I was currently invigilating at work at the R.A. – a glorious piece in which the figure of an artist formed from a folded up blanket sandwiched between two scraps of board looks out bravely across the threshold of a yellow strip-light, leading with a table-leg Pinocchio nose. I used a pale yellow blanket in my performance made of the same sort of material as the blanket in the sculpture, folding it up and covering my head with it in a direct quotation. I had Christmas lights nearby to shine on the blanket too, in the same way that the strip-light shines on the brain-blanket, gorgeously, in the Eric Bainbridge piece.

At the start of my piece I took off my shoes and socks, draped two sets of Christmas lights around my shoulders, held a black sack containing the Christmas tree parts over one shoulder, and walked around the large room, pushing an upturned glass bowl with my foot. I walked around the space for quite a long time, making sounds with the scraping bowl and the dragging plugs of the lights.

I came to a pause and put down my things back in the corner where I had began. I cut open the sack and removed the Christmas tree parts, placed them on the floor in a mound, ran the lights through and plugged them in so that it looked like a nice little fire. I boiled water in a kettle, poured the boiled water into the glass bowl and mixed in pine needles which I had been keeping in a jar, in order to make a pine needle tea. While this was brewing I lay face down with the blanket over my head. I kept my shirt on for once – an experiment. I wanted to look like the character in the Eric Bainbridge sculpture, and also I wanted my head to look like a nut that had been placed beneath cloth prior to being smashed open. Seeing the photographs afterwards, I realise that what I looked like most of all was a corpse with its head covered (this resemblance would have been accentuated by my keeping my shirt on as my breathing would have been less obvious than if my back had been bare) – in fact when I showed the photographs afterwards to a friend who had once had a nightmare in which I had been lying dead on the ground, she said I looked just as I had in that dream. While I often wish to look in images made in my actions like a body being cut open, I don’t really want to look like a corpse just lying there. The only reason I would want to look like a dead body is in order to enable the body to be cut open.

I emerged from under the blanket and strained the tea through a sieve into a clean bowl. I drank the tea slowly, kneeling, looking into the mound of tree parts and lights.