30/ “TRAVEL JOURNAL (FOR ŔLVARO, ADAM, BETTY AND LAURE IN HALLE, PARIS AND BERLIN)” 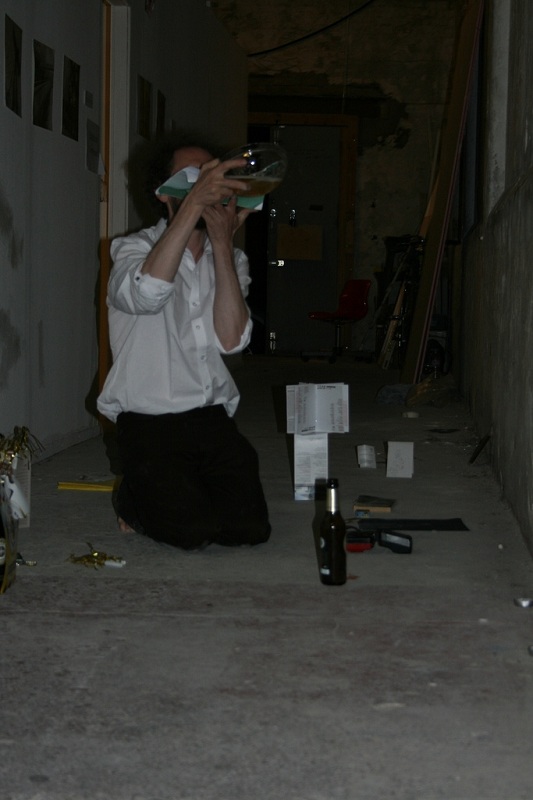 After a week of travels through France and Germany, on the aeroplane on the way home I made plans for a performance as a kind of travel journal, using as props bits and pieces picked up on my travels. I gave myself the rule that I would have to use anything anyone had given to me, no matter how inappropriate it might seem. Items collected voluntarily I could use or not use, as I felt fit. I also reprised one or two moments from the performance I had made seven days before in Halle, “Super Absorbent Atonement (Aktion)”.

The setting was great, a really old-looking crumbling corridor. I made a performance much more quiet and slow than usual – not that I am usually loud or fast – not at all – but this time I really was unhurried.

In Paris, my friend Laure had given me one of the three editions of Voltaire’s ‘Candide’ that were on her bookshelf, as well as a black & white photocopy of a painting after Bosch’s ‘Garden of Earthly Delights’ with just the landscape and no figures, that Laure, being an art teacher to children there, had set as homework to her pupils, with the aim of having them collage things onto it. In Halle, Ŕlvaro, curator of the show I had gone there to make a performance for, and designer of poster for the same, had given me said poster. In Berlin, I had visited my friend Adam, who had just opened up the latest version of his gallery Another Vacant Space; he had given me a condom packet, blue with a smiley face, that he had picked up off the street and insisted that I really must have, and a paper napkin from the Nolde-Stiftung that someone else had given him; and there I met and made a new friend, Betty, whose exhibition was the inaugural one in Adam’s new gallery, and her grandmother had just died at a great age, and she had with her one or two cuttings of fir trees from the cemetery, and she gave me one of those.

I taped to the wall one beside the other Álvaro’s exhibition poster, the similar-looking bottle opener I had used in Halle performance, one golden fringe squawker ditto, and Betty’s fir tree cutting. I drank some Warsteiner beer. I constructed small towers on the floor, something like the fantastical structures in the left and central panels of the Bosch painting (my all-time favourite painting), out of various odds and ends: three more fringe squawkers, a leaflet in Spanish on what to do in Halle, the invitation card to the great little Rudolf Schwarzkogler show I’d seen in Berlin, the gallery guide to the great Georg Baselitz sculpture show I’d seen in Paris, a leaflet for the Gemaldegalerie in Berlin, and a couple of blank postcards I had drawn on but not sent. I taped Adam’s condom packet over one eye, like an eye patch (I had been looking at this condom packet thinking, what the hell am I going to do with this? It absolutely did not fit into my aesthetics, but I had set myself the rule that I had to use every item I’d been given. Literally the only thing I could think of was to use it as an eye patch. And then I thought, well who am I to say it’s a bad idea to use the condom packet for an eye patch? My judgement is not infallible. So let’s just go ahead and do that anyway. And then I decided that it was actually a great idea, and I learnt an important lesson there, and reduced to one working artist’s eye with the smiley-face looking out from the other I had an emblem of that very lesson).

I had prepared in advance a small book with blank black pages, and the homework empty Bosch landscape as centrefold. I took a gold pen and drew on the front cover a picture of one of my little towers (unfortunately I didn’t make a very good drawing). Then I opened the book and wrote in it a short letter to Laure, lying on my front, reading the words out loud as I wrote them, explaining what I was doing in the performance. Throughout the performance I would pause now and then to take photographs, which I would stick into the book afterwards (like the drawing on the front, the photos didn’t turn out very well). I turned a bowl of beer black with watercolour as I had done in Halle, knelt up with the book open at the centre-pages in front of me, tipped the bowl of blackened beer to my lips keeping them closed and let it spill down from my chin to stain the landscape.

I drank clean beer from the bowl, using the notebook I had used on my travels as a funnel/bridge. I flipped the pages of the Voltaire book to create wind with which to flutter the thongs of the fringe squawkers on wall and tower. I used the Nolde-Stiftung napkin as it was intended, for mopping things up.

All of these little actions I did very quietly and, most of all, discreetly. I just put together a sequence of small quiet things that sat beside each other rather than piling everything into a collapsing crescendo according to my usual compositional mode. It felt good to structure something in a different way for a change; I think I felt somehow empowered to do so being so relaxed from such great holidays.