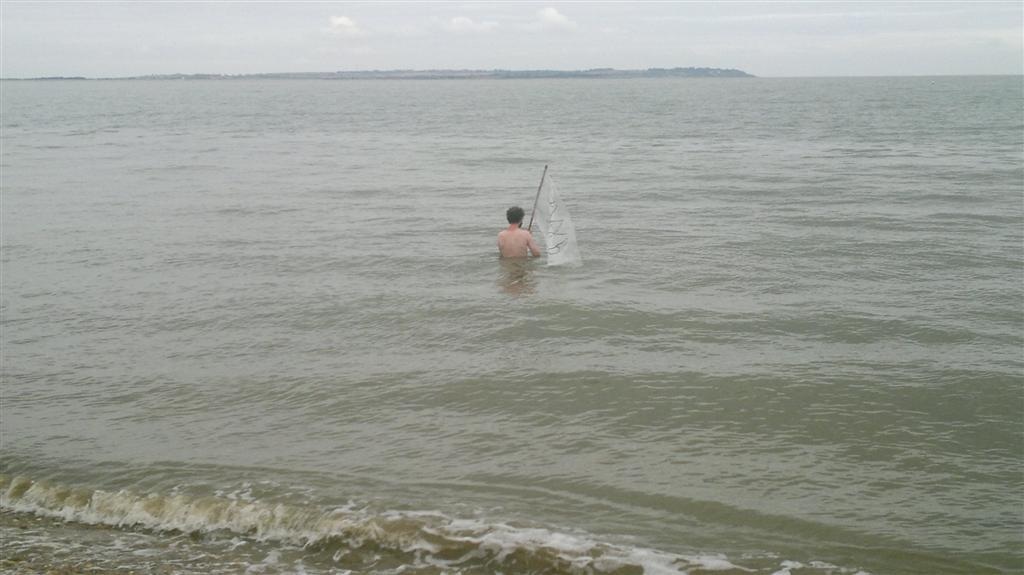 performed on the beach and in the sea at Whitstable as part of my exhibition “He Varnished His Clothes, His Cape And His Hat And Paraded Thus All Shiny In The Street: Joos van Cleve, Cornelis van Cleve, Karel van Mander And Me”, 2nd September 2012

I had made posters announcing a

As part of Duncan’s project He Varnished His Clothes, His Cape And His Hat And Paraded Thus All Shiny In The Street: Joos van Cleve, Cornelis van Cleve, Karel van Mander And Me, the four artists will take a walk together in the sea off Whitstable – that is, Duncan at least will definitely walk in the sea where the spirits of the three sixteenth-century artists are invited to join him. In order to render their presence more tangible (or to act as stand-in props in the event of a no-show) Duncan will be carrying a flag, evoking Joos, and wearing a tail, evoking both Karel and Cornelis.

and, on the appointed date, I made the walk in the sea.

Weather was fairly good: several hot days leading up to the walk helping to lift the temperature of the sea a little. On the actual day, after a bright and sunny start, it clouded over somewhat and was not as warm as the last few days had been, but still perfectly tolerable.

I had been planning to do the walk mid-afternoon, but a couple of friends who were in Whitstable and had a train to catch back to London wanted to watch. I told them it would really not be that much of a spectacle (since I wasn’t really expecting the ghosts to make an appearance) but still they wanted to see it, so I did it late morning.

I stripped to swimming trunks and wrote out on a paper scroll (I used a till roll) HY VERNISTEDE MET TERBENTIJN VERNIS ZIJN CLEEREN, ZIJN CAPPE EN ZIJN BONNET, EN GINGH SOO AL GLIMMENDE ACHTER STRAET – which is to say, “he varnished his clothes, his cape and his hat with turpentine varnish, and paraded thus all shiny in the street”, which is a line from Karel’s biography of Joos, although in fact he was getting the father mixed up with the son and it was really Cornelis who did that. It seemed to take quite a while to write all that out. Next I took a needle and some golden thread and attached the scroll as a tail to the back of my trunks, while still wearing them, trying not to stab myself in the backside. It was meant to look very comical, me rummaging about like that, I don’t know if it was or not. I’m very bad at sewing anyway, but I pinned on the tail in the end, although I managed to sew the needle into my trunks also. I thought, that will be good enough, and picked up my flag and set off.

I am very happy with the flag. It was only once I had made it that I realised, I have never owned a flag before. It feels good to have a flag. It is a piece of clear plastic sheeting attached to a broom handle, bearing on it in black marker pen Joos van Cleve’s monogram –

– as in “Ioos van der Beke” which is how he used to sign himself.

Whitstable beach is all pebbles of course, so I had to hobble quite painfully to get down to the sea. It was more or less high tide when I went in – the cotton scroll I had an hour or so before attached to one of the groynes, down among the rich green slimy seaweed, bearing the legend SOMETIMES I FEEL LIKE THAT TREE FALLING IN THE FOREST, was by now completely submerged and would remain hidden beneath the water until a few hours later when it re-emerged just hanging on by a single thread. Because the tide was so high, I found that once I was in I was still walking on painful pebbles. I walked about looking for the mudflats and gentler walking, found nothing heading to the west, but finally hit softer terrain to the east, and with mud and sand under my feet I could start to enjoy the walk more.

I remained however alone – no sign of the ghosts of Joos or Karel or Cornelis – but I thought about them, and it was nice thinking about them out there. I thought about them each in turn, about what I most valued in each of them, for Joos his paintings as exquisite objects, for Karel his lively drawings, for Cornelis his varnishing of himself. And then I thought about the time between their lives and mine, more than four centuries apart, and I felt very pleased that something of them had survived across all that time to be with me now, in the sea.

The water was not particularly warm, although certainly the temperature of it troubled me less than those uncomfortable pebbles underfoot. And perhaps a little coldness was not inappropriate, for it made me think of how much colder my three colleagues must be, their old bones lying in the ground.

I looked across to the Whitstable Biennale HQ hut some way down the beach, at the throng of contemporary art people milling about there, and it seemed to me that, between the contemporary scene and the world of old masters, everything was basically okay.

As to depth, I just went in as far as I could walk on tiptoes with the water up to my neck. Because of how the tide was, and the way the floor slopes down quite steeply at first before levelling out, I was never very far from the shore.

I walked back up onto the beach and I found that I had lost my tail somewhere in the sea. I had gained a small cut on my leg, I’m not sure from what, maybe just from rough seaweed or grit floating around in the water. I dried myself off and got into warm clothes.

I had been thinking to perhaps make a second walk later in the day, but the sun never really came out to encourage it, and it didn’t really seem necessary, so I left it at that. I walked along the beach pinning up my posters, which I perhaps should have remembered to do in advance of the walk, but the sequence didn’t really seem so important. I hoped that someone might have caught a glimpse of me carrying my flag in the sea and then later on stumbled across one of the explanatory posters, and that would probably be ideal.

Text taken from SEA PROCESSION REPORT by Duncan Ward as part of his project HE VARNISHED HIS CLOTHES, HIS CAPE AND HIS HAT AND PARADED THUS ALL SHINY IN THE STREET: JOOS VAN CLEVE, CORNELIS VAN CLEVE, KAREL VAN MANDER AND ME, published by YOUNG MOUNTAINS, October 2012, edition of 20 copies.

Thanks to Nicole Mollett for the photograph, and for hosting the project on its first outing by the sea.