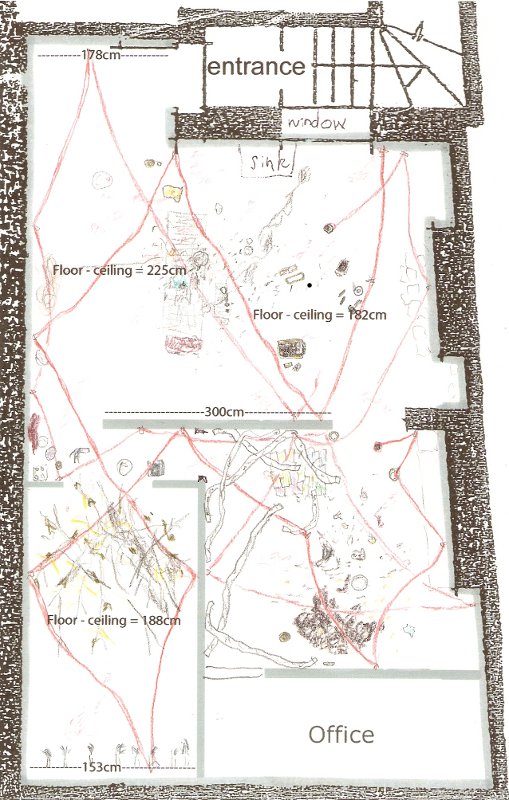 'Lock In' was a performance event featuring three artists over three evenings, one long performance each night and the audience locked into the gallery for the duration. It said on the posters, “What will happen when nobody is allowed to leave?” I made the first evening's performance and luxuriated in having the whole space to myself, and it was a lovely space, far more interesting than its name would suggest – a basement gallery of three low-ceilinged rooms, a small one, a smaller one, and a tiny one like a hermit's cell. For 80 or 90 minutes I made a whole series of small actions, the residual materials from which grew little by little into a big installation filling the entire space. At the decree of the curator, photographic documentation was forbidden. Instead, the audience were encouraged to write about the performance on a blog site.

“An apocalyptic party, or just, what it's like in Heaven.”

And someone else wrote:

First of all, this is my first encounter with this “type” of performance.

the sense of time is the first thing: I doubt I've ever felt this “in touch” with the length of things, with time passing, with someone “creating time”.

I was scared of coming. Scared of going to a weird performance, scared of interacting with other members of the audience. I embraced this fear, for the first time as well, I connected with the event stimulating my brain but without necessarily being entertaining.

It was up to me to get into it. However, some of the actions/sounds/images/words WERE entertaining, some seemed POETRY to me, some metaphorical and catharsis, some moments were resonant of a critic of society.

I felt good about the performer. I guess I felt he wasn't an arty farty prick. I felt he was sincere, going on a true journey...

I was self-conscious of being too naďve and too positive about everything, I kept looking at others to check if they liked it.

Locked in: I was cold and I probably would have picked my coat if I hadn't been locked in. The sound of the champagne. I felt I understood huge aspects of society simply by following this collage of images, textures etc. I felt lucky I felt like the space was perfect.

I was thinking: is the red thread cheesy? I thought: IS this a degree show? I loved the champagne and the wine ritual. I thought: is he nervous? Is he going too quickly? I was happy I felt so many things even though it was my first “fine art” durational performance – I liked the face of the performer, he looks like my brothers, some cousins, some friends, that totally helped to make it a performance based on collage. Between reality and dreams and thought I didn't feel like he was removed from the real world like I feel some fine art artists are.

I thought: is it his first performance? I thought: how did he describe what he was going to do to the curator? I liked the first text of the booklet about memory and present. I had the SAME THOUGHT during the performance, I thought: don't drift away. Because what is happening, you can not make it happen in your thoughts. You even might not be able to remember it.

I liked the calmness yet the sense of enjoyment of the performer.”

Oh, I am happy with these comments!

Also, the website fringereview.co.uk carried the following review, with a star rating, the first time I've been given one! (I got four stars out of five):

“Duncan Ward's Old Tricks at the Community Art Centre was a very engaging piece of performance. Lock In interrogates the effect of physically locking the audience into the space – for this piece I always felt perfectly happy to be present in the experience. Ward wanted to create a new world for us, rejecting futile attempts to change our existing, difficult world. We had to accept his world, we were locked in.

From the beginning Ward set up a calm, meditative atmosphere in the small gallery space. Throughout I found his energy very calming and magnetic. He did very little to directly engage the audience, no eye contact, walking through the space regardless of if we were in the way. However, this minimalism translated into the sense of watching a meditation as Ward's movements were very measured and regular. This quality was occasionally punctuated with moments of humanity – Ward nearly slipped on the accumulation of ink, wine and water on the floor, at another point he couldn't get the soap out of the dispenser.

I really enjoyed the interplay between the materials that Ward chose – the very natural elements of soil, leaves and wood with the plastics of streamers. All of the man-made objects in the piece connoted celebration, particularly the drink – champagne, red wine and beer. Ward would set up a situation with the natural material, then subvert it with a man-made one. He drank champagne from a pile of compost, stirred rock salt into beer with a party hooter, and placed gold lametta over a construction of twigs and seaweed.

The section I enjoyed most was 'The Scrolls' where Ward slowly wrote out significant quotes from his creative life on small banners. Potentially, this is because it was accompanied with a photocopied, handwritten book talking about the significance of each quote so the 'meaning' was easily accessed through the witty text. I enjoyed getting this insight into the process of creating the show.

There could have been a little more consideration on how to end the piece, which is always tricky for this kind of performance. The audience treatment could also be more thought-out, how to make them feel part of the space not slightly in the way.

The Community Art Centre has a lovely feel to it; we were welcomed into the venue with free beer in a small walled garden and a chance to chat to fellow audience members before the piece started. I would definitely like to see this space used for more performances.”

As ever, when getting the last train back from Brighton, something went wrong (but it has healed...) Having to change trains at East Croydon, with my big heavy rucksack filled with all my junk from the performance, getting out of that narrow gangway of that carriage, I bashed myself twice on the knee... And I couldn't understand why the pain was so sharp, until I got down onto the platform and saw that the scalpel which I had brought along to open up holes in the Fortnum & Mason carrier bag from the pulley system (but which ultimately I hadn't even utilized, the little aperture already there having proved amply sufficient) had worked itself free from the cloth covering it had been sheathed in and was now sticking right out of the bottom of my rucksack, and that I had cut my knee with it... I hobbled around for a couple of days but now I am okay again.