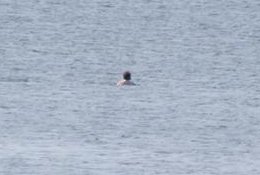 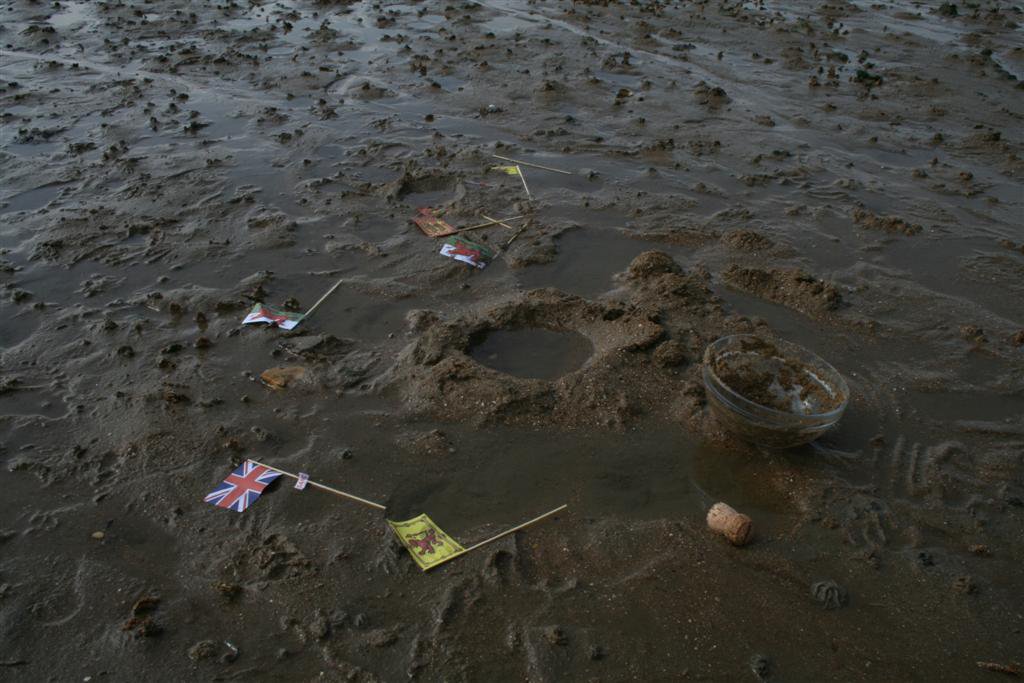 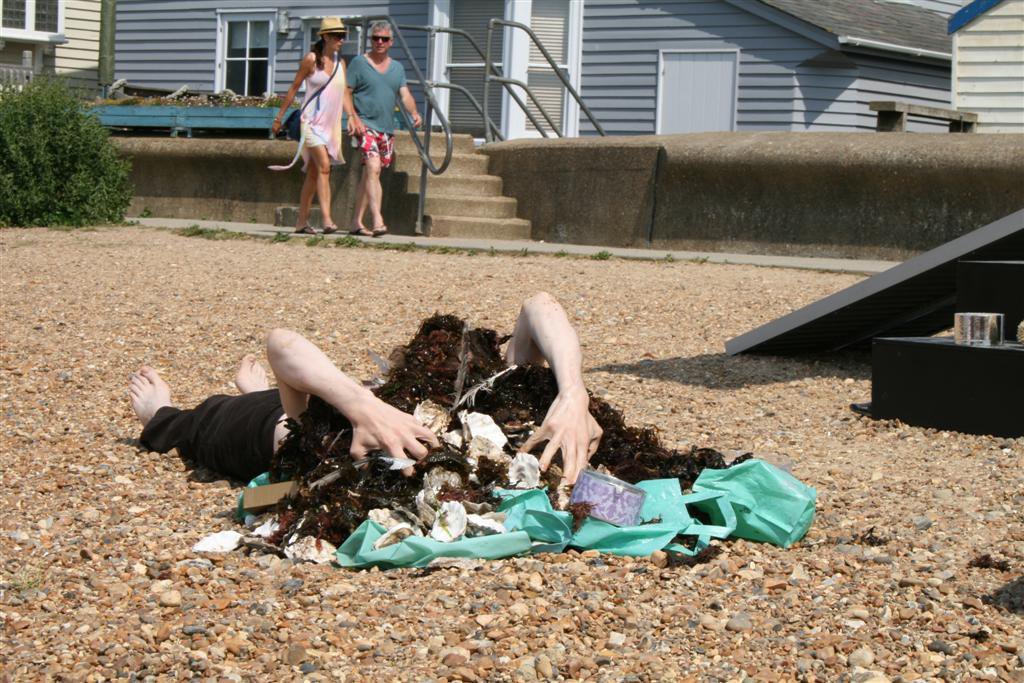 At the 2010 Whitstable Biennale, on the beach, Nicole Mollett launched her Cultural Olympiad commission project, a 1950s Airstream trailer converted into a mobile exhibition/project space to tour Kent until the 2012 Olympics, with a series of one day interventions from invited artists. On the first Wednesday it was Charlotte Warne Thomas and I. Charlotte further converted the trailer with a sculpture acting as extra ornamental staircase. I exhibited the first 46 drawings from “The Old Joys”, made a small accompanying book whose text I’ll give below, and made a series of three performances.

I followed the tide, making the first performance while the tide was still high, on the beach just in front of Charlotte’s steps; as the tide went out I made the second performance down on the mudflats; and for the third performance at low tide I went right out into the sea.

For the first piece, “Cosmetics Nest”, I built a nest of oyster shells and seaweed (I had harvested seaweed into four Fortnum and Mason bags early in the morning – the dark wet slimy green of the seaweed and minty green of the bags looked incredibly nice together). I stuck in seagull feathers, sprinkled on lavender-scented bath salts and bluebell-scented talcum powder. I opened a bar of vetiver-scented soap, and put it into a bowl of water. I added the packaging from the soap and salts to the nest, and stuck the F&M bags in there too. I performed my old trick of squeezing out a sponge soaked in soapy water and trying to catch the juice in my mouth. Then I lay back in the nest, reached back and pulled it all over my head and chest. (When I saw the photographs afterwards I found that my face had not been covered as much as I had thought, making me look in fact like a briny-bearded King Neptune figure.) I poured the bowl of soapy water over everything. `

The second piece was yet another variation on my old “Champagne Hole” performance. I filled a sandcastle-mould with ice to turn it into an ice bucket, and used it to carry a bottle of champagne down onto the mudflats, accompanied by small children. There I scooped out a hole and set a glass bowl inside it. I opened the champagne and poured it into the hole, opened a pack of sandcastle flags and scattered them around it. I went down on my belly and guzzled champagne from the hole. I added sand to the champagne and stirred it with one of the flags, lay down on my back and poured the champagne sandy mud over my belly, then went to rinse off in the sea. (I’m not sure if this performance was very good. The procession with children down to the mudflats was good, the champagne drinking looked good from the shore, and the scattered flags around the hole made a good image. The whole thing probably didn’t flow together terribly well though, and the pouring of mud over the belly wasn’t very good this time.)

The final piece took place quite late in the day, after 6pm. We had originally scheduled to be packing up at six, but it was such a gloriously hot and sunny day, there was no rush. Not many people were around on the beach by this time, the families had all gone off to have dinner etc. Two philosophy students on a day trip out of London stumbled upon us (they hadn’t known there was a biennale) and proved to be the most interested visitors of the day, so we decided to crack on with the final performance right away so that they could see it. The entire audience was just Charlotte, Nicole, and our two new friends. It felt really nice to be such a small group, and the sea which I wanted to perform in was now far out, the five of us walked down to the shore together and that felt good. “Menstruating Merman” was a second version of my performance “Second Wave Man” in which I had regurgitated red wine meditatively down my front in simulated menstruation. This time I much extended the piece, menstruating a whole 75cl bottle as I wandered about exploring my outdoor surroundings. I poured the wine into a glass bowl and went over to one of the seaweed-covered wooden groynes to begin: a mouthful standing, a mouthful crouching, back resting on the cool damp seaweed wall. I stood the bowl on one of the groyne posts, looked over the wall. More mouthfuls, the rivulets beginning to show more down my torso, down my legs. I menstruated over my shoulder, sending a rivulet down my arm. All slowly, slowly, it felt very good. I walked about on the mudflats, looked away into the distance as I held the wine in my mouth, then released it to run down me and fall into the wet sand. I went further out, ankle-deep, calf-deep in the water, to menstruate into the sea. Already I looked small from the shore, my friends on the beach sitting, standing, photographing, grew smaller and farther away. When all the wine was used up I stood the empty bowl on a post sticking up out of the water. I began walking out into the sea. The seabed dropped away so slightly though, so gradually, that I was walking and walking a long time with the water barely higher than my knees, than my thighs. Eventually however it became deep enough to swim in and, finally able to swim, I swam with enthusiastic powerful strokes, so that I got quite far out quite quickly. When I turned around to begin swimming back and saw my friends as small specks on the shore, I realized how very small and far out I must have appeared and that I had probably worried them. (At the same time, I was pleased to have made the image of someone swimming away for good, returning to his watery realm.) When the sea became again too shallow to be swam in, I continued on foot, walking through the shallow water (the water, by the way, was perfectly warm). And while walking like this a wonderful little thing happened, I suddenly came across a beautiful little crab sitting directly in my path. I hesitated, as people do when meeting on a busy street, unsure which way to step aside, left or right. But the crab of course was custom built for scuttling sideways and made up his mind to dart sharply off to his left and I carried on ahead and back to shore.

The booklet I referred to above was published by Young Mountains in an edition of 100 copies, with text as follows –

The old joys, back when we had to make our own entertainments, long before TV, long before the internet, long long before... Saints getting themselves martyred, hermits doing penance in the desert, rolling in mud, sniffing at flowers... The old joys, forgotten pleasures from our childhoods, jumping in puddles, putting the wrong things in our mouths. Some things we were taught to forget that maybe we ought to re-establish as legitimate adult conduct.


Sometimes the urge takes me, overtakes me, I feel it very strong – to enter the mud. Sometimes I want to dig; to make claws of my hands and scoop away at the soil, create a tunnel and stick my nose inside. The earth looks splendid, sumptuous. What truffles are down there? I am all snout.


Unshaping the body... Two arms two legs and a head and all that that means. Take off the arms, take off the legs, take off the head. Open the belly and see what’s inside. Skeletons we have dragged around with us our whole lives and never seen, lungs pumping away in the dark, endless intestines, strange organs. The unlit interiors of our bodies, as alien to us as the furthest black reaches of space.


I spy a gravel pit, all moist with recent rain. Standing above it, looking down, I feel my tongue flicking from side to side in my mouth like a snake’s! Would that I could slither down through there... I squeeze in my shoulders, press my elbows to my sides, narrow myself into an exploratory tentacle, a slender bark, capsizing canoe with an adder’s tongue darting from the prow...


The lungs pump for their own pleasure in pumping, the blood races through its circuits on a whim, the nervous system sings for itself high above our hearing range, the digestive system has its own agenda... Our survival as an accidental consequence.


Unharvested joys ripe for the picking, big ones, little ones, ones that break the scale... Great ecstasies are ours for the taking (and I think they are the real thing...)


Parisian soaps, bath salts from Sicily, lotions laced with flecks of real gold. Wallowing in luxury as if it was manure, marathon baths of rich ladies locked away in the bathroom, naked as beasts, the world locked outside, bodies smothered in foam, using soap like swampwater, animal acts of cleansing abetted by expensive cosmetics.


Reaching bodily perfection didn’t seem to do us much good; so we smash it up and rebuild it, try it another way. Turn it upside down and inside out. The fun always starts when the human form is rebelled against, when its shape and status are called into question.


Into the sea, throw it all into the sea... dowries tossed into the drink, swallowed up, lost in the waves... legs turned into tails, the joys of being devoured... swim out and come back clean...