09/ “LUCAS CRANACH WAS A BUSINESSMAN TOO!” 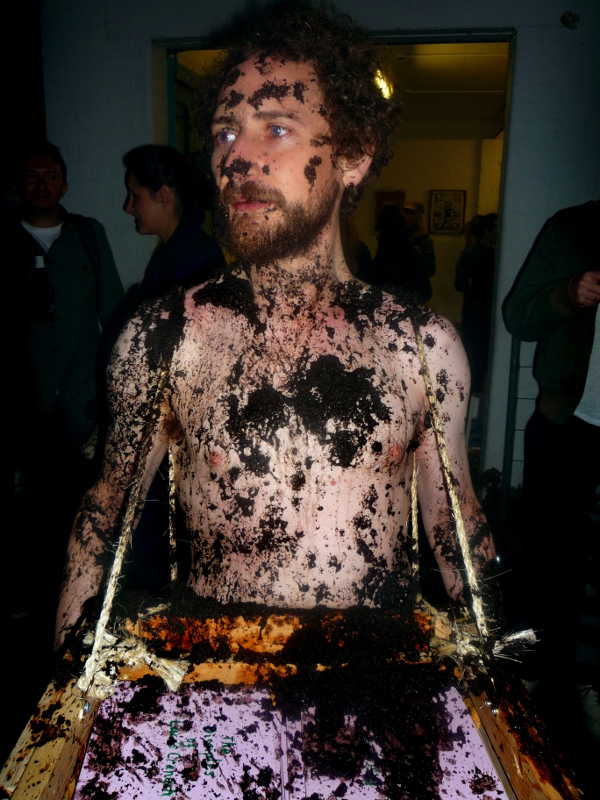 performed at the opening of the exhibition “The Disciples Of Lucas Cranach”, curated by Duncan Ward and Nicole Mollett, Utrophia, London, 9th October 2009

I had built a sculpture, “Pillory” (see OTHER WORKS), which was (and is) a wooden box with rope straps, filled with copies of the Young Mountains publication “The Disciples Of Lucas Cranach” on a bed of leaves. At a certain point in the opening of the exhibition of the same name, I put the pillory over my shoulders and stood out in Utrophia’s yard. I had set up two buckets of mud on the gallery’s threshold, and informed a few people beforehand that I was to be pelted with the mud.

When I took up my position outside (in the cold and slight drizzle), I waited and waited but nobody wanted to be the first to throw. I wondered if maybe nobody would throw mud and that would be the end of the piece. Eventually however the mudslinging started, and then more and more, joyously. I had wanted to give the crowd the joy of mudslinging, and slowly, after an uncertain start, it started to happen. Finally a couple of people launched whole bucketfuls at me, but each missed (as if jerked by “the hand of God”) and so that was the end of that part of the performance.

I then wandered amongst the crowd trying to sell the now-soiled copies of the book (I sold four or five). Going back into the gallery, my cold feet on the cold floor felt very spongy. When I at last removed the pillory I had interesting rope-burn marks over my shoulders and an interesting mud-tide heart-shaped mark on my midriff.