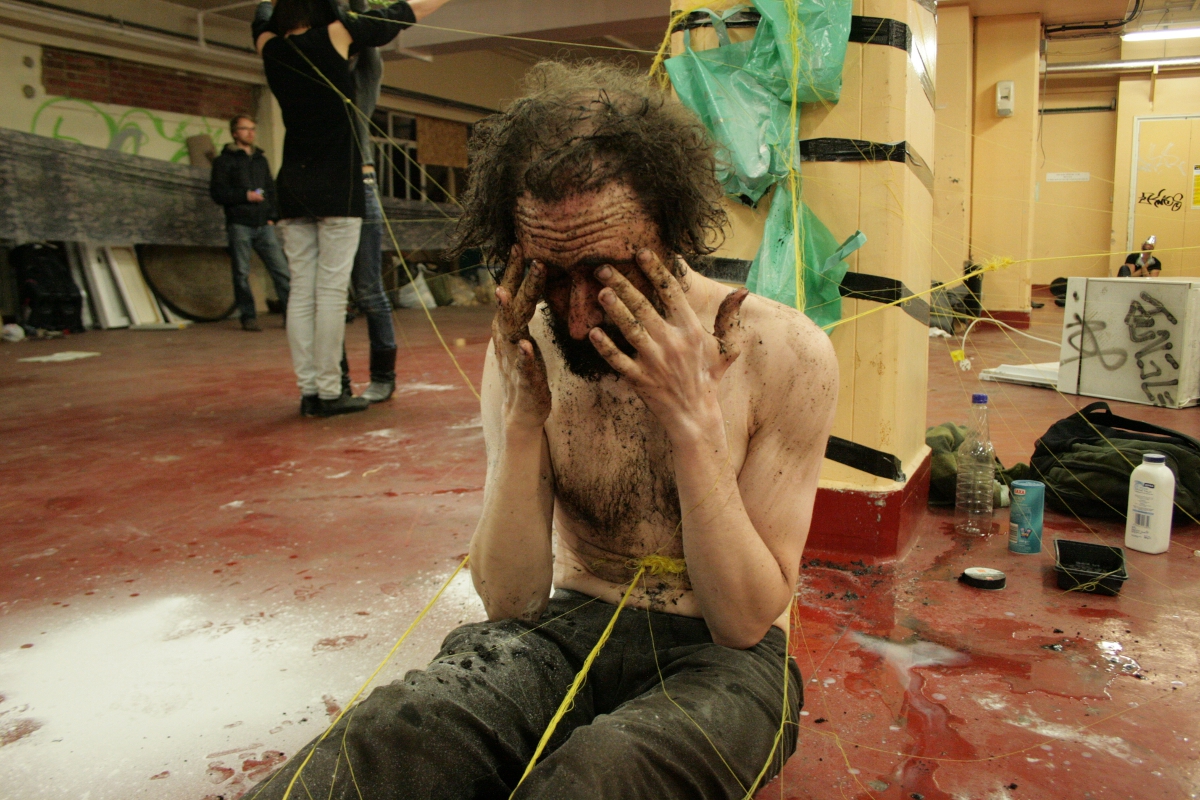 This performance took place in a disused commercial laundry. I hadn’t been intending to perform at the event, but when I saw photos of the space with its red floor and row of square pillars down the middle of the room, I suddenly wanted to do something there. It was a group performance, involving around a dozen artists and being focused on spontaneous actions, but as I have no talent for spontaneous actions, I made a more or less discreet piece in the centre of the room while the other actions swirled about me.

I wound gaffer tape round and round the central pillar, using it to suspend four Fortnum and Mason carrier bags one above the other. I filled the top bag with talcum powder, the next down with water, the next with soil, and the lowest one with salt. I lay down with my face directly below the bags, and used a knife to make little holes in the bottoms of the bags. Little by little everything dripped down, mixing into a kind of mud on my face and in my hair.

It felt nice, nicer than expected. Things dripped down more slowly than I thought they would (I was pleasantly surprised), it felt like being rained on. When all had fallen I lay there and became aware of feeling very cold on that bare floor. My teeth started chattering. I didn’t know if anyone else was close enough to hear or see them chattering (my eyes closed tight beneath the paste) but I stayed where I was and let them chatter on. I listened to all the other sounds coming from the other actions going on all around me, enjoying the sounds very much and wondering what actually was going on and who was making which sounds.

I sat up and started wiping the mud off of my eyes prior to opening them. This was a fiddly business, and I took a long time over it. (It was good knowing that there were lots of things going on and that the audience would be wandering from one thing to another, therefore I didn’t need to hold their interest and could go as slow as I liked.) I wiped mud onto my chest. Eventually I opened my eyes. I tried to pick the dirt out of my hair, but it was completely matted.

One nice surprise was the taste of the paste where it touched my lips. I had not given any thought to this beforehand, and if I had then I imagine that I would not have expected any especially tasty chord to be struck by the mixing together of those four raw ingredients. But it really was quite pleasant.

I began to look around me to see what else was going on. Someone tied me up with yellow thread (I got a beautiful drawing out of this image). I walked about, observing, dragging the thread, shook it off, put the clothing I had removed back on, opened a beer, and drifted off into the audience to watch the remainder of the group performance.