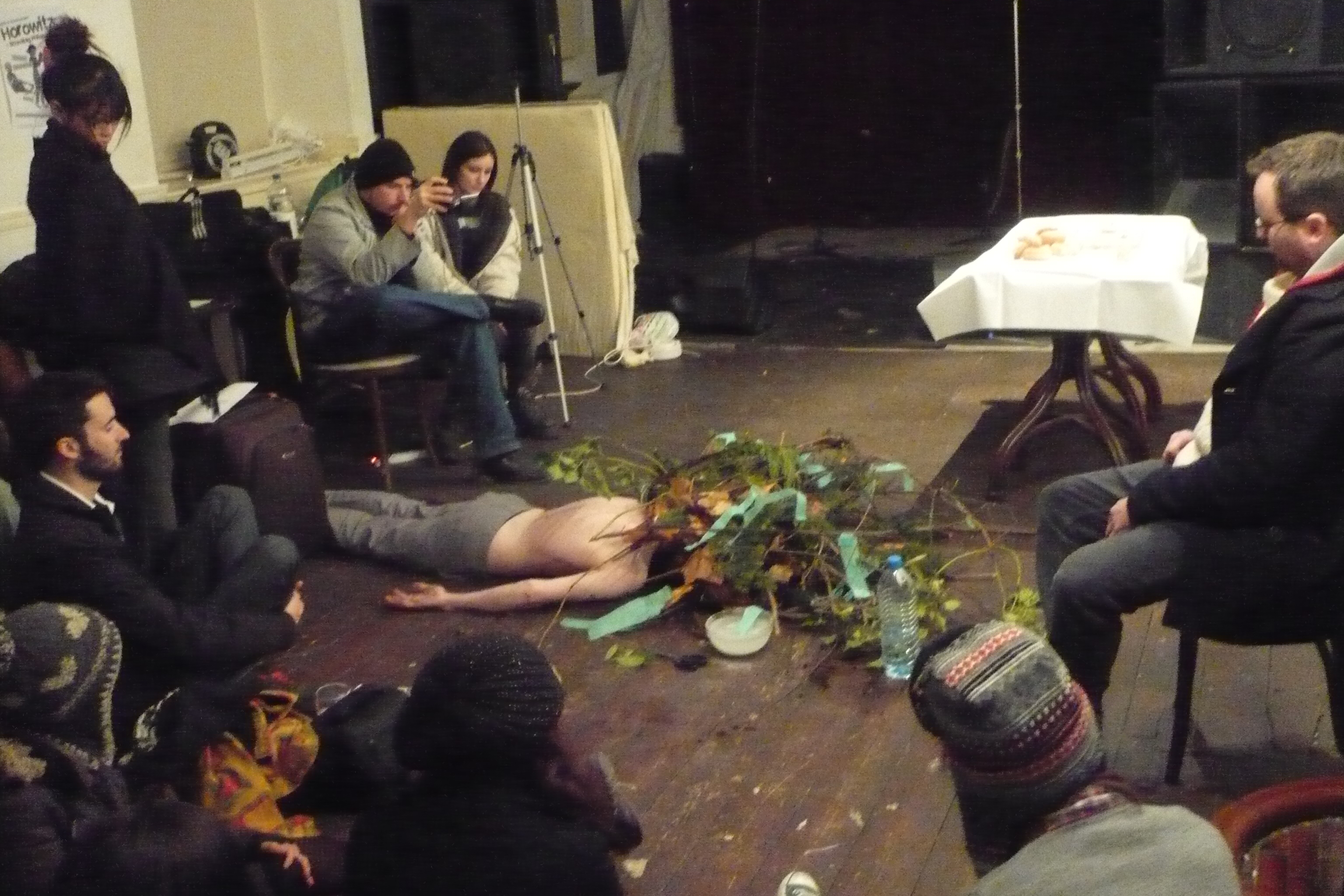 performed for second night of the One Finch Performance All-Weekender, The Chameleon, Nottingham, as part of “Sideshow 2010” festival, 5th December 2010

Winter 2010-11 was a long cold winter in England and when I went to Nottingham for the One Finch Performance All-Weekender as part of the satellite programme to the British Art Show 7, the whole town was under snow. Outside the Nottingham weekend revellers were going crazy skidding rowdily over the fallen flakes hollering dressed for summer, while inside in a cold, cold room above a café above a card shop, were two nights of performances, of which I made one for the second.

The best part of my performance was its beginning. There was a beautiful old wooden floor to the venue, and I announced the start of the action by pushing an upturned glass bowl into the centre of the room with my foot – the sound was very beautiful.

Next I brought into the centre of the room two Fortnum & Mason carrier bags and took out their contents: a bottle of water, talcum powder, pair of scissors, fir tree parts, leaves, and soil. Then I brought out a large pile of branches.

I slowly built the branches into a pyramid structure. I paused to take a drink of water from the bowl, then I refilled the bowl and added plenty of talc to the water, mixing it in with a stick. Going back to the pyramid nest, I stuffed it with the leaves and soil, then lay the bits of fir tree all over its surface. I cut one of the F&M bags into ribbons, and further decorated the nest with these.

I felt about with my left hand until I found the bowl and carefully lifted it, holding it in both hands above my belly, then I tipped the talc-and-water solution over myself. I lay a while like that before sitting up and removing with my fingers the soil from my eyes.

I put the scissors, talc, and water bottle into the still intact F&M bag, and carried it off to the corner of the room where I had left my jumper and t-shirt. I put them back on and, to signal the end of the performance, I took one of the ring donuts that had been created in the course of the preceding Tom Estes performance and which stood on a table in that corner, and ate the donut. That was a good way to end the performance.

There was a handout sheet with artist statements for the All-Weekender. I wrote:

Duncan Ward seeks sovereign moments, collapsing form into formlessness, wallowing on the ground. At Sideshow 2010 he will lose his head in a nest of branches and pour pleasant things over himself.