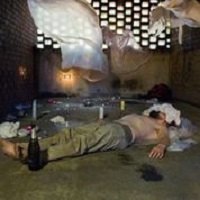 Priced out of their previous home in Hackney Wick, the performance space ]performance space[ signed a provisional lease to take over a long-abandoned underground car park, located beneath a tower block in Poplar. The space comprised a long driveway and a large number of garages lined up either side of it. The plan was to use the garages as studios and to have performance events in the central space. All of the old rubbish was cleared out, the black grime powerhosed off, and no less than a “VIP event” put on for an audience of landlords, residents, councillors and press. The event comprised ten artists making simultaneous, individual performances, each of us stationed in one of the garages.

I had recently made a little piece called 'Little Cloud', a photograph of a single cloud in a blue sky, mounted on gold card, in a gold frame. I had made it especially for my exhibition 'What It's Like In Heaven' – which exhibition still has not actually happened yet – and especially to be shown in a basement. So I thought that while I was waiting for that much-delayed show to materialise, I might take the opportunity to show my little cloud in this other basement, and so I built a performance around that.

I set up the cloud photo beforehand, hanging it on the back wall of my garage, low to the ground, in the corner. In the opposite front corner I propped up a torch, shining into a mirror so that the light was thrown back across the space to fall as a spotlight on my photograph. It looked very magical!

In the course of the performance I made further clouds. I opened a bottle of prosecco, used the prosecco to slightly wet pieces of cotton wool, and worked them into cloudy clumps, perfuming them with talcum powder and an aftershave going under the amusing name of Mandate. I also drank some of the prosecco, squeezing it out of cotton wool and catching it in my mouth or sipping it from the plastic bowl I had poured a quantity of it into. I made more clouds by stringing up dust sheets and pieces of foam packing material. I shook and squeezed out large quantities of talc onto them, and also sprayed them with the aftershave and with some of the prosecco which I had poured into another atomiser. I poured glitter onto them also.

I tried one or two things that didn't really work out before lying down on my back and half covering my face with cotton wool. I was going to mix up a concoction of materials to pour over my face, but as I lay there in a preliminary pause I noticed how my clouds were moving about in the breeze, and how beautiful they looked moving like that. The car park was actually only half-underground: halfway up the back wall where it hit ground-level, the solid wall gave way to a regular pattern of apertures where bricks had been left out to let in a little light and air. And there was a lovely Summer evening breeze, really perfect, that was blowing in and gently making my clouds fly. This was not planned but it was a lot more beautiful than what I had planned. So I didn't make any further actions but kept things right there. I just shifted my head a little to the side to check that I was not blotting out the spotlight on my photo with my torso – that was fine, I wasn't – and so I just lay there watching out of my one uncovered eye the movement of the clouds, and enjoying what were the really fabulous smells of this performance. The good thing about having the simultaneous performances and the audience wandering from one to the other was that it allowed me to just set up a tableau like this and not have to worry about maintaining people's attention with a sequence of actions.

I stayed there like that a long time, I don't know how long, certainly more than thirty minutes, maybe a full hour. I really felt like I was in the clouds. After a while I also really started feeling aware, at the same time, of my carcass and my skeleton lying there on the hard concrete floor. And after a while also I started to feel cold. And when it was not fun any more, I quietly got up and went over into the back corner to retrieve my t-shirt, jumper, socks and shoes, and put them back on.

By this point much had happened with the event. It was a complicated event. One of the residents had a loudspeaker and was protesting against ]performance space['s moving in. (Apparently a majority of residents were in favour of ]ps[ coming, but there were also some who wanted the newly-cleared garages for their cars, or were not keen on the prospect of performance art nudity, or were concerned that it heralded the gentrification of their street – which latter view the artists in fact were rather sympathetic to and torn about.) There were rowdy kids noisily riding bicycles up and down through the middle of the space, but I think the kids were on our side. Towards the end, a man came in going crazy, shouting at everyone to get out and throwing bottles around. As I was winding up my performance, people were already in the process of fleeing the place. Crouched in a dark corner putting on my shoes, the man didn't notice me at first, but when he did he yelled at me “GET OUT YOU LITTLE GIT!” and then launched a beer bottle at my spotlit photograph. It fell from the wall, but its glass survived intact. I got out and the police came and arrested the man.

We all repaired to a pub to have a calming beer and talk things over. The next day the ]ps[ directors met with the landlords and finally it was decided not to pursue the project in that location. It was a shame that they had worked so hard cleaning that space up for nothing, but I felt relieved when they told me they'd decided to move on. Really not worth such hassles. So now they are moving, for the time being at least, to what should be a more trouble-free space in Deptford. Good luck to them there! I did enjoy making that performance though.