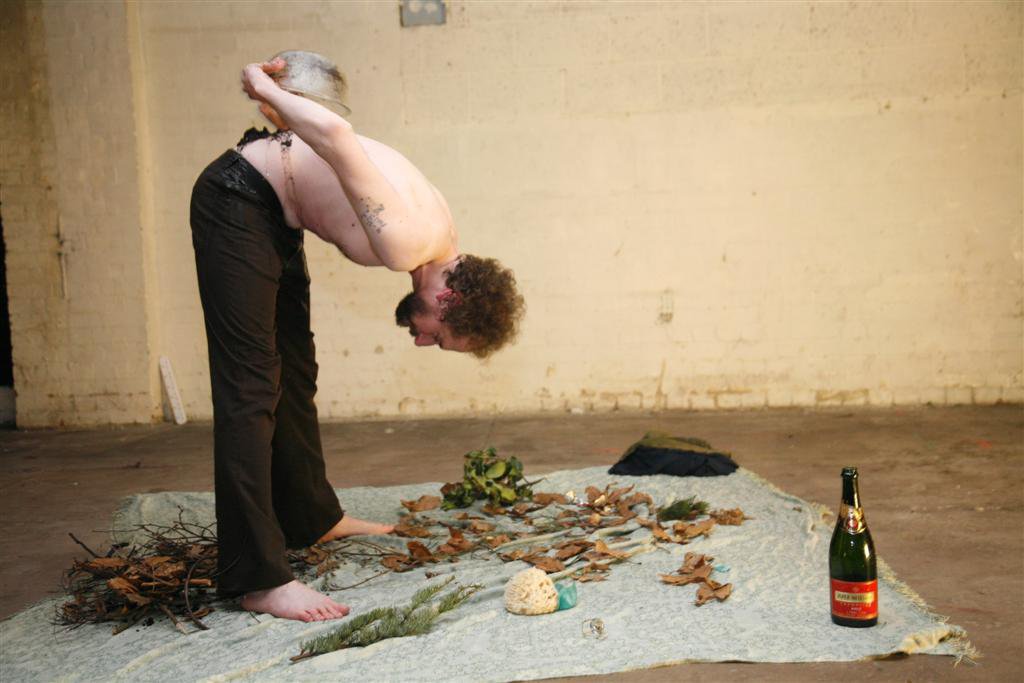 For my first ArtEvict performance, ôSecond Wave Manö, I had made something a little different from my usual work, in some ways anyhow. This time I decided, quite wrongly, to show something more representative to my new found peers. And so I cobbled together bits from lots of old perfs into what I fear was probably a fairly unconvincing whole.

I spread out a green blanket, made a little nest of branches and leaves (too small), stood a glass bowl atop it, poured champagne in, guzzled champagne down on my belly, opened a bar of Roger et Gallet vetyver soap with my teeth, mixed soap into champagne, soaked up solution in sponge, squeezed it out and caught it in mouth, mixed dirt (out of a badly chosen blue envelope) into the soapy champagne...

Then the good bit I think, I had decided to make a quotation of ArtEvict founder/organizer Kiki Taira, and got into a position used frequently in her performances, legs apart, head down forward, back straight, hands crossed behind. In this position I made my own familiar action of pouring bowl of mud over myself, this time though not over my front but up my back.

Then I pulled my jumper back on, folded everything back up into the blanket and dragged it all away. I thought I would leave a muddy trail, but that didnĺt happen (not enough dirt, not enough drink). All the things I had done had been quite pleasant in themselves, but probably the whole thing was way too cobbled-together and too hurried through.