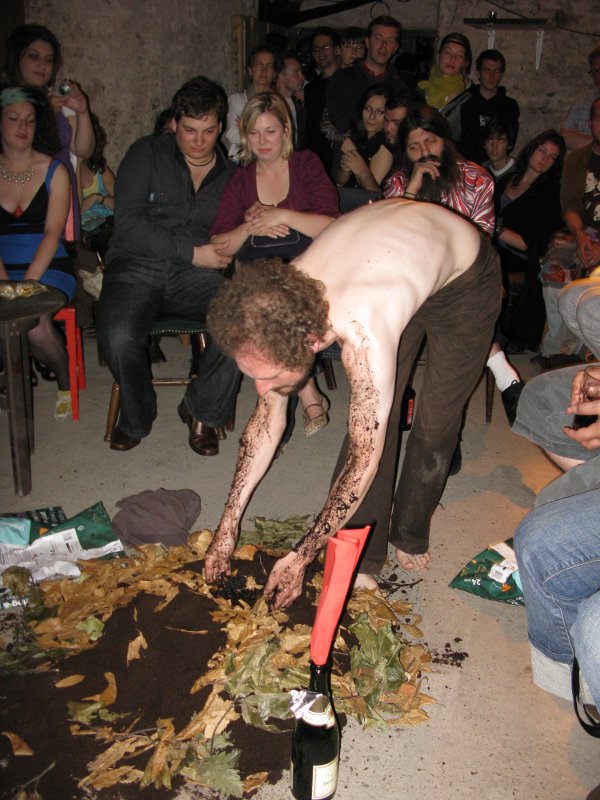 After precisely nine months, my biggest ever gap between performances (during which I upped my for-galleries output), I made a third performance for Frog Morris. This was a version of what was supposed to have been an outdoors piece that never happened, relocated to old storage vaults beneath London Bridge Station.

In the most intimate setting since “AUTUMN (VETYVER)”, but to a crowd this time mostly of strangers, I emptied out two bags of soil onto the stone floor. I scattered a dusting of sprigs and leaves on top, and then made a hollow in the mound and inset a glass bowl. I opened a bottle of champagne and poured the champers into the hole. A little of the champagne I tipped into a red paper aeroplane which Poppy Jackson had handed to me in the course of one of her performances a week or two before. I drank champagne from the poppy plane, the bubbles went up my nose.

I went down on my front and guzzled champagne out of the hole. When about half of the champagne was gone I got up and mixed soil into the champagne, stirring with a sprig to make champagne mud. I lifted the bowl out from the mound, refashioned the mound into a sort of pillow/recliner, lay back and looked at the ancient vaulted ceiling. I poured the champagne mud over my chest (I had made it slightly too thick however and it didn’t slide down me quite to plan. It photographed okay however). I put my pullover back on and exited.

Young Mountains published a book documenting this performance with forty photographs taken by Maria Bourika, in an edition of 30 copies.

The book also reproduced some notebook pages detailing my unfolding plans for the piece, including three Georges Bataille quotes taken from the “De Sade’s Sovereign Man” chapter in “Eroticism” –

“In the world as it used to be, men used not to renounce their exuberant eroticism for reason’s sake as they do now. At any rate they wanted mankind personified by one of their fellows to escape the bounds to which the masses were subject. Everybody agreed that the sovereign should enjoy the privilege of riches and leisure, and the youngest and loveliest girls were reserved for him.”

“In olden days the spectacle of royal privilege made up for the poverty of common life, just as tragedy on the stage counterbalanced the placidity of common existence.”

“The respect of man for man leads to a cycle of servitude that allows only for minor moments of disorder and finally ends the respect that their attitude is based on since we are denying the sovereign moment to man in general.”

In place of the youngest and loveliest girls, the darkest, richest soil. This performance was, as much of my work is, an attempt to create a space in which I can act sovereignly (I would make the attempt more explicitly in the performance “Jubilee”). In doing so, with such modest means, I hoped to demonstrate to my audience how every one of them - each according of course to his or her own tastes - might act in a sovereign manner too. The freedom to wallow in mud and leaves is a kingly one because the action is so purely gratuitous. It does not matter if the materials wallowed in are priceless or worthless, it is the gratuitousness of the endeavour that confers sovereignty. Such an action is available to everyone. The sovereign moment, as I understand it (a sovereignty based not on power relationships vis-ŕ-vis other people but inherent in an individual’s bearing), is available not only to “man in general” but to each and every person as a sovereign themselves.