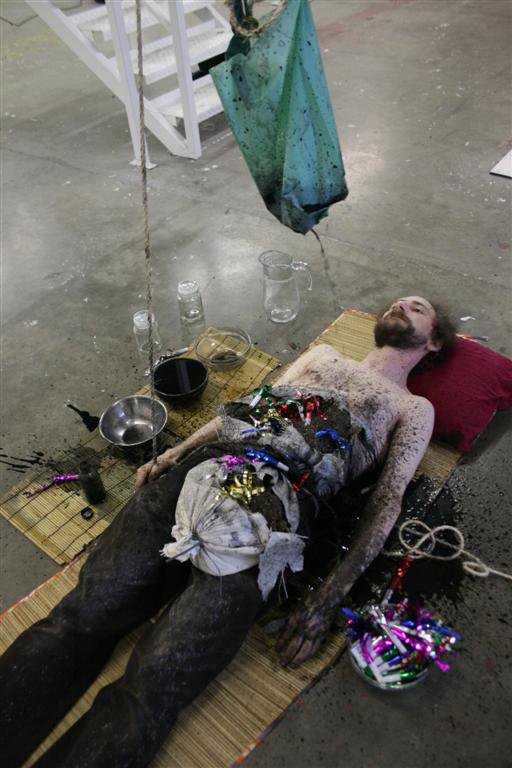 This was a performance for a show comprising of a performance event followed by the exhibition of residual materials from the actions. The other artists were Poppy Jackson, Kiki Taira, Nathalie Bikoro, Bean, and Victoria Gray. We all performed simultaneously, but individually. I made a performance in four sections, which took about an hour and a quarter. I was the first performer to finish, the whole group performance lasted about two hours.

For the first section, “Talc Clouds”, I opened up the space by walking through its two rooms with bluebell-scented talcum powder, rhythmically tapping on the container to release scent and sound all through the space. I had opened up an earlier performance (“Bluebell Wood”) in the same manner, but this time I did it with arms raised fully aloft, something I had learned to do from seeing performances by Poppy Jackson.

The next, and longest, section was called “Pulley System”. I had earlier passed a rope over the balcony railing overlooking the performance space; I now tied a Fortnum & Mason carrier bag onto one end of the rope, and looped the other end around a sandbag. I unrolled the bamboo beach mat that had been given to me at the previous Summer’s Whitstable Biennale. I filled bowls with water, tipped out a pile of fringe squawkers. I poured water into the Fortnum & Mason bag and added black ink. I lay on my back on the beach mat, resting my head on a pillow of folded towels topped with silk, and placed the sandbag on my belly. I used a scalpel to make small holes in the F&M bag and then raised it aloft by pulling on the rope, letting little sprinkles of ink spurt down onto my torso and onto the sandbag. Then, little by little, raising and lowering the bag of ink, refilling and refilling, I made more and more holes in the bag, causing gradually larger sprinklings of ink, and bit by bit cut open the sandbag, spilling more and more sand, sticking more and more of the fringe squawkers into the sand, and collapsing things into a black-stained, sparkling (from the fringe squawkers), heap on my belly and at my sides. It was cold down on that floor and at times I shivered visibly. I would have preferred to be warm and comfortable, after all I wasn’t attempting to express anything through suffering – this is a frequent problem when performing in poorly heated spaces. (The next day I made a slight tweak to my leftovers in finishing the “Pulley System” sculpture, I brought along a small rock, placed it on the floor a few metres to the side of the beach mat, tied the loose end of the rope around the rock, and placed a few of the fringe squawkers on the rock like they were insects crawling over it.)

The next section of the performance was simply the installation of two sculptures made from fringe squawkers fished out from the pulley system debris, and tacked to the walls in rows – “Scourges (Golden Scourges)” in the large room and “Scourges (Blood Red)” in the small. (The two colour-versions co-ordinated with the other work that each neighboured, in a planned way with the reds of Kiki and Poppy, in an unplanned way with the yellow of Bean.)

These first three sections had all been devised a long time before; I had had the idea that there ought to be four sections, but I didn’t know what to do for the final section; finally after running through the sequence of actions in my head many times, I decided that after making the “Scourges” sculptures, what would be needed at that point was the sound of a cork popping; so I thought of things I might do with champagne and settled on “Dividends”. So I cleaned the ink from one of my glass bowls, popped the cork, and filled the bowl with champagne. I thought that it might be nice for people to drink champagne from a bowl, so after drinking some myself I went around one by one offering it to all of the audience members and, where appropriate, to some of the fellow-performers. Some people wanted the champagne and some didn’t. We didn’t quite finish the bowl, so I placed it back with the pulley system, put my shirt and shoes back on, and retired to warm up by the radiator.