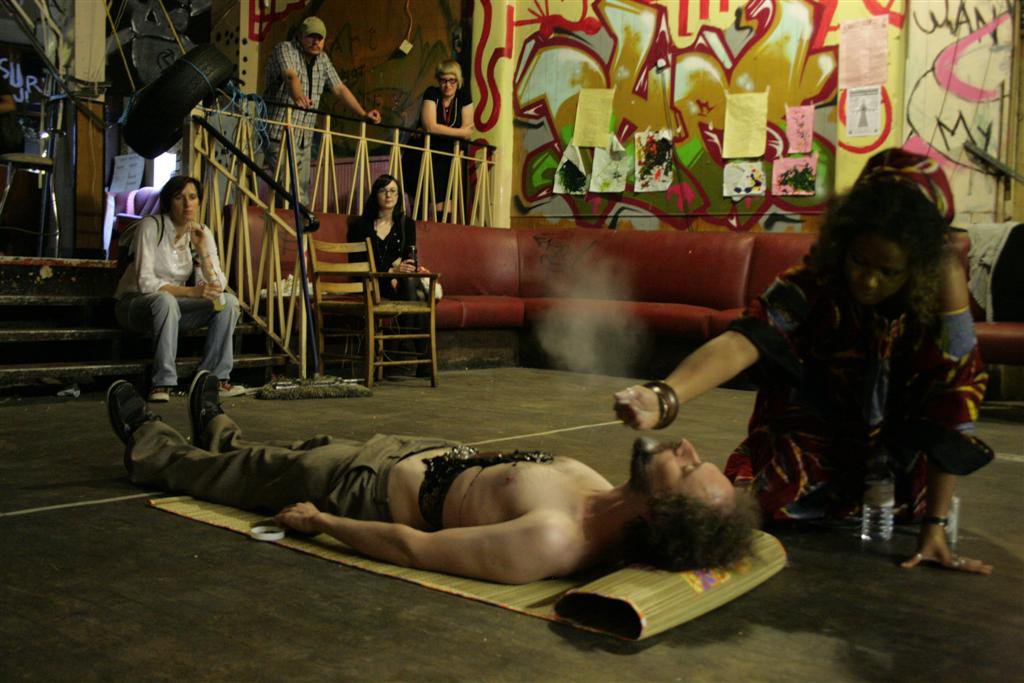 July’s ArtEvict event had supposed to be taking place outdoors, in Abney Park cemetery, but got cancelled the day before, the venue proving to be unavailable to us. We relocated back to the squat/community centre on Mare Street that had hosted the previous two ArtEvicts. Because the piece I had planned involved the reflection of shimmering treetops into a mirror on my belly, I had to redesign it considerably. I worked on my plans until 1AM, until I had a new piece called “Bluebell Wood” (my father was at the same time making a painting of a bluebell wood, so I decided I would do the same). I would recreate the image of a bluebell wood indoors, in pieces, using sounds, smells, movements of light.

I performed on the large wooden floor. I first walked in circles around it, tapping the bottom of a talcum powder tub to release puffs of bluebell-scented talc into the air. I walked through the audience continuing to release little scented clouds so that everyone could smell it up close.

I added water to a soil-filled screw-top jam jar, replaced the lid and mixed mud with a rhythmic shaking that sounded nice, I did this too in circles and then through the crowd.

I took a bamboo beach mat that had been given to me by one of the four-person audience to my “Menstruating Merman” performance of a few weeks before, and very slowly rolled it out, pressing it hard against the floor, making loud crackling noises. I removed my pullover and folded one end of the mat up around it to form a pillow for my head.

I lay down and poured the (very black) mud over my belly, and slapped a round mirror down into it. I breathed, quite gently, enough to make the reflections move in my belly. No treetops, but there was a swaying movement, and at times and from certain angles the lights on the ceiling flared in the mirror like suns.

I began to breathe audibly from my mouth, louder and louder, although I did not achieve such good sounds as I had in my previous performance “Improvements 2”. (I was trying to make the sound of a breeze in the treetops.)

People wandered over one or two at a time to see themselves reflected in my belly. Nathalie Bikoro tipped out quantities of the talcum powder into the palm of her hand and held it in front of my lips so that I could blow clouds of it up into the air.