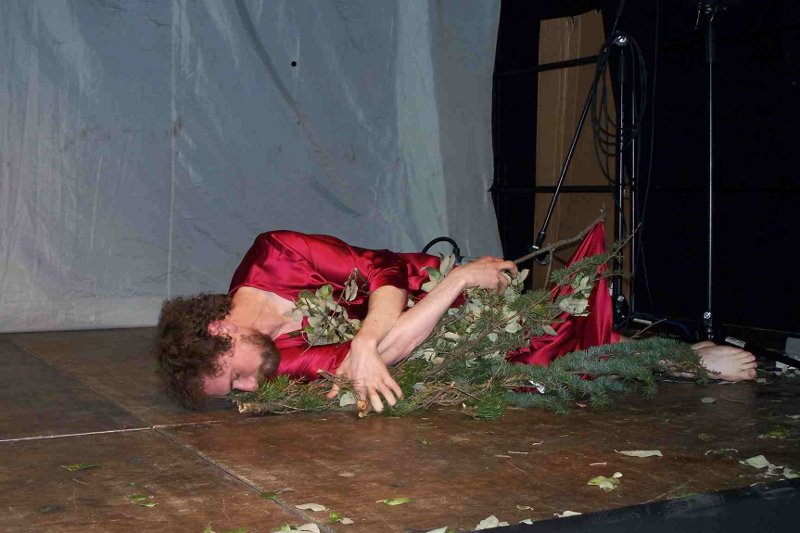 
I had sent in a proposal for a performance at Reception Space’s Valentine’s event and been refused; they invited Elizabeth Klanga to perform however, and she invited me to perform with her.

My work and Liz’s are actually very different, but we arrived at a plan for an action of mine to segue into an action of hers.

She costumed me as one of the figures from Botticelli’s “Mystic Nativity”, provided a soundtrack of whistling wind, set up an electric fan at the side of the stage, and organized some special bluish light effects.

I entered from the back of the theatre and made my way through the audience and onto the stage with an armful of birch branches, placed them down, and added a further armful of fir branches retrieved from the wings.

I arranged these into a nest and wallowed in the nest, much like in my previous performance “Triangle Tree” but much slower and more gentle.

An angel then pulled me from the nest with an olive branch to begin Liz’s half of the performance; we embraced in a recreation of one of the details from “Mystic Nativity” and the angel led me off stage.

(Briefing the angel beforehand, Liz and I had given her conflicting interpretations of the story. Liz told her that she was rescuing me from the hell of the branches; I maintained that the angel was nice but the branches also were nice, and that I would be pleased to be enjoying them both.)

For a little while afterwards, under the influence of the wind sounds, costume, and lighting, I felt like I really was some kind of holy man high up a mountain.