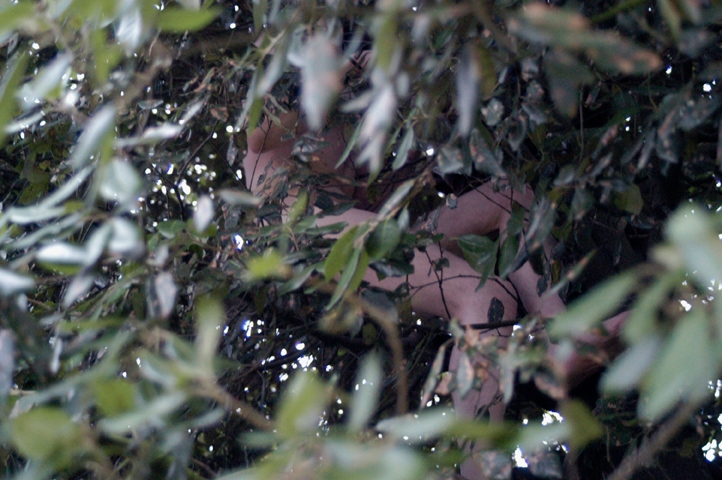 This was actually one of the earliest performance ideas I had, I devised the piece some time in the first half of 2008 but never found the right opportunity to perform it. Also since 2008 I had been planning to make a book with Ottavia Castellina, of her photographs of my performances. Otta was leaving town at the end of 2010, so we suddenly found that we needed to start working fast to do the book before she was gone. We didn’t have quite enough pictures for a book, so I made the “Bath In Tree” as a photo shoot without audience.

I selected a tree beside the Serpentine Gallery in Hyde Park (no significance that it was by the gallery, I had simply scoured the park and that was the most suitable tree). A smallish, thickly leaved, well shaped, climbable tree – and as an extra pleasant surprise, I found on exploring inside that the tree was full of robins.

I got a coffee and waited for Otta, paced about trying to keep warm. It was a very cold afternoon. I had always intended the piece as a Summer performance (I’d had thoughts to maybe do it as a picnic event), but since we were having to act fast, at last, we had to act in November.

I left my shoes at the foot of the tree and climbed up with all of my materials in a rucksack on my back. It took more time and effort than I had anticipated to get up into the tree, but I got up there, and I found a bough to sit down on. I took off my rucksack and tied it to the tree, and took off my clothes and stowed them in the rucksack or draped them over branches.

I applied talcum powder to myself, and washed my hair with shampoo, and brushed my teeth, all the while dropping more things out of the tree to form a pile strewn beneath me.

I enjoyed the bath very much. I actually didn’t feel cold at all while I was up in the tree – whether that was due to the shelter of the thick foliage or just because I was so involved with the performance I am not sure – and I managed to settle myself, after a little while, into a very comfortable position cradled in the boughs of the tree.

I put my clothes back on and climbed down, and found that the lower branches of the tree, sprinkled in talcum powder etc, smelt incredibly good. It was very nice climbing down through them. I got cold suddenly and horribly when I put my bare feet down onto the cold ground which was of course now drenched from all of the little cascades of water I had sent down in the course of the performance. My teeth chattered, I shivered all the way to the bus stop which I walked to in a bit of a daze, and my hand was bleeding a little (I had cut it on the tree). When I got onto the bus it felt so warm inside, and the seats felt so soft, I felt so tired, and smelt amazing.

One thing that didn’t quite work out was that the leaves of the tree hid me more completely than I had envisaged. I had planned that I would be mostly hidden, but that body parts would show through here and there, now an arm sticking out, now a leg; but it seems that I was quite invisible from outside. Only Otta beneath the tree could see me, and she reports that passersby seemed oblivious to my presence and were all looking at her wondering what she could be photographing. So the missing image of limbs emerging through branches I made in a new performance, “Bathing A Tree”, a few weeks afterwards.

The book, “Ottavia Castellina and Duncan Ward – Performance Photographs”, was published by Young Mountains in January 2011 in an edition of 15 copies.