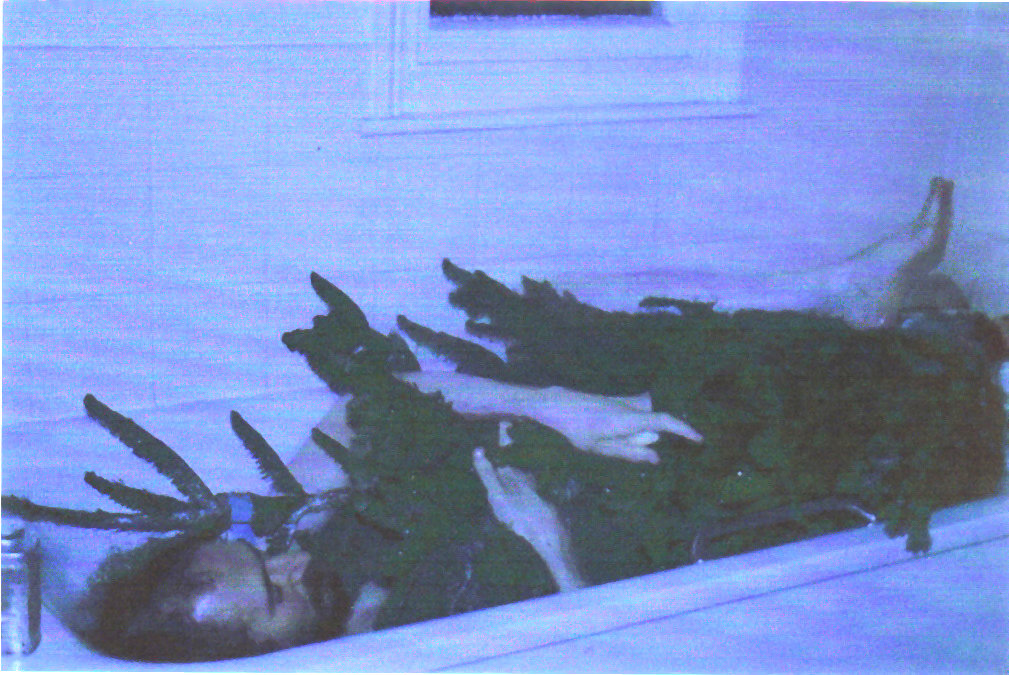 While a group of performance artists were in Nottingham during the snowy first week of December for Sideshow 2010ĺs ôOne Finch Performance All Weekenderö, it was decided that we should all assemble a fortnight later at Kiki Tairaĺs house for a Christmas action-dinner: everyone would bring a dish, we would eat, and then everyone would make a performance. I devised my piece during one of my walks between the performance venue and my hotel.

Taking advantage of the fact that Kikiĺs house boasts a bathtub (it has been three houses and several years since I lived anywhere with more than a shower), I decided to make a kind of sequel to my ôBath In Treeö performance of the month before ľ an inversion really of that piece, bringing the tree indoors and bathing the tree, and everything contained in the tub rather than spilling out from the tree. I wanted to get an image I had been aiming to make in the earlier performance but which hadnĺt quite come off, of my limbs poking out of the greenery.

To fit with the Christmas occasion I bought a Christmas tree, about five feet high. By the evening of the action-dinner, snow was still settled on England. I took the tree through the snow to Hackney.

I ran a bath while another performance was taking place downstairs, got in and pulled in the tree, still netted, after me, on top of me. The bathroom was small, the tub nearly filling it, so my audience came in one or two at a time, in turn.

I cut open the netting with scissors and the tree relaxed and let out its branches. I sprinkled bath salts and bubble bath into the water. I shook clouds of talcum powder into the air, onto the tree, into the water. I took a bar of soap and washed the branches of the tree, scrubbing with a nail brush and sponging with a sponge. I made certain to stick my left leg through the branches, got nice and tangled with the tree. I closed my eyes and lay peacefully in the warm water. The smells of my expensive soap, talc, and bath salts, mixed with the lovely natural scent of the tree, made a very pleasing combination.

I would have liked to remain there for a long while, but when the water grew cold and I tried to add more hot water, I found that there was no more hot in the tank and so I had to cut my bath short.