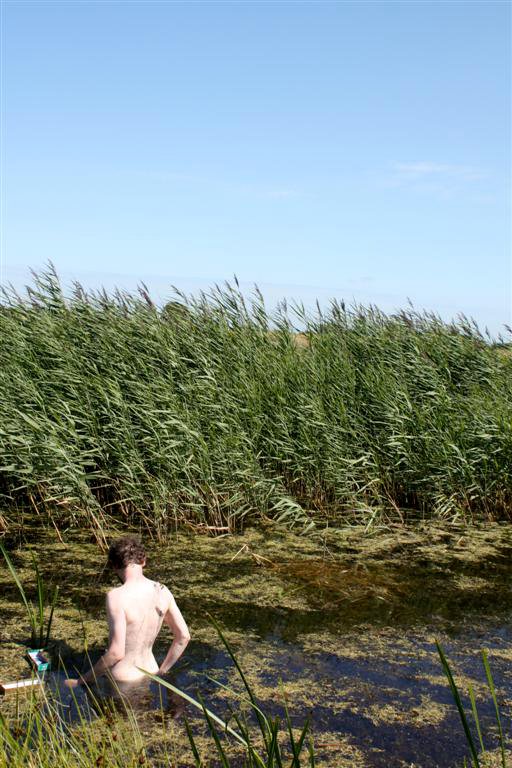 A slight change of plan, this fourth and last volume of the Y.M.R.M.R. Journal was to have followed an identical format to the preceding three, being a book of drawings drawn and printed all in one day. There was a tempting ditch however, filled with slimy green plants and rich black silt, and over breakfast Maggie Rose persuaded me that we ought to make actions in it (she subsequently decided to perform in the adjacent cornfield instead, but I performed in the ditch). Therefore this book becomes, instead of the planned book of drawings, a documentation of my performance.

The piece is called “Bath In A Ditch” (a second sequel to my “Bath In Tree” performance). It was witnessed only by Maggie Rose and Nicole Mollett, who both photographed it, and perhaps by a few animals. We walked, in the hot afternoon, along the edge of the cornfield to a beautiful bend in the ditch selected by Maggie. As props I took only a bar of Roger et Gallet vetiver-scented soap and its gorgeous box (I had fortuitously brought them both on the Retreat, the soap for my daily hygiene and the box as a pencil case); I would wash myself in the English ditch with the expensive Parisian soap.

I took my clothes off and eased myself down the bank and into the water. The water itself was surprisingly clean and clear: there was a couple of feet depth of this before one got down to the layer of squelchy silt. I walked out just a few steps until I was waist deep in the ditch (silted up past the knees). I used the lid of the box to scoop up water and pour it over my upper body, and washed myself with the soap. Then I plunged the lid deeper to scoop up silt and poured that over myself, mixing it with the soap and rubbing it all in. I found that the lid and tray of the box floated on the surface of the water, even with the soap in the tray, so I floated them. It felt great to bathe in the ditch, especially on such a hot sunny day and after three nights’ camping without tub or shower. I lifted my legs one after the other level to the surface and soaped them too. I climbed back up the bank, washed myself after my dirty bath with clean water from a bottle, towelled off and dressed.

Since I need to get hold of all the photos before I can print this book it cannot like the others be published on the day; but I will print it as soon as I can – hopefully tomorrow or the next day, depending when the last disc comes in the post.