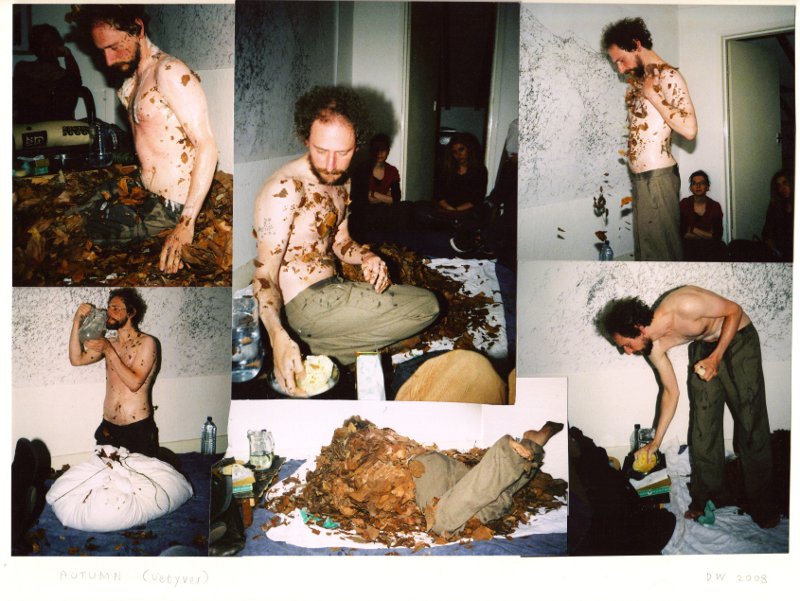 This performance took place in the intimate environment of the living room of a house I was about to move out of, with an audience of eleven people arranged around me in a semi-circle, very close, on sofas, carpet, and chairs.

On a blanket on the floor and before a backdrop of my very large drawing “The Ruins Of Temporarycontemporary” (see OTHER WORKS) I arranged a big pile of dead leaves.

I wetted my torso with water and soaped it with Roger et Gallet vetyver soap (going with the French spelling on the packet). I stuck leaves onto me as a kind of plumage.

I repeated this process through three bars of soap, diving deep in the leaves, drinking from the water jug, and working up an increasing lather along the way.

The lather actually was working rather differently than how it was meant to. When I wanted lather there was none, and when I wanted clean water there was nothing but suds. I wasn’t sure how well the performance was going. I decided to improvise.

I found myself with a jug of soapy water with a few leaves floating in it, and decided to try drinking it all. I didn’t manage it all, but drank most of it, about two-thirds of a pint. That was the end of the performance.

The whole room of course smelt very strongly of the soap and of the leaves.

Afterwards the band Chubby Nest played a concert amongst the debris of my performance.