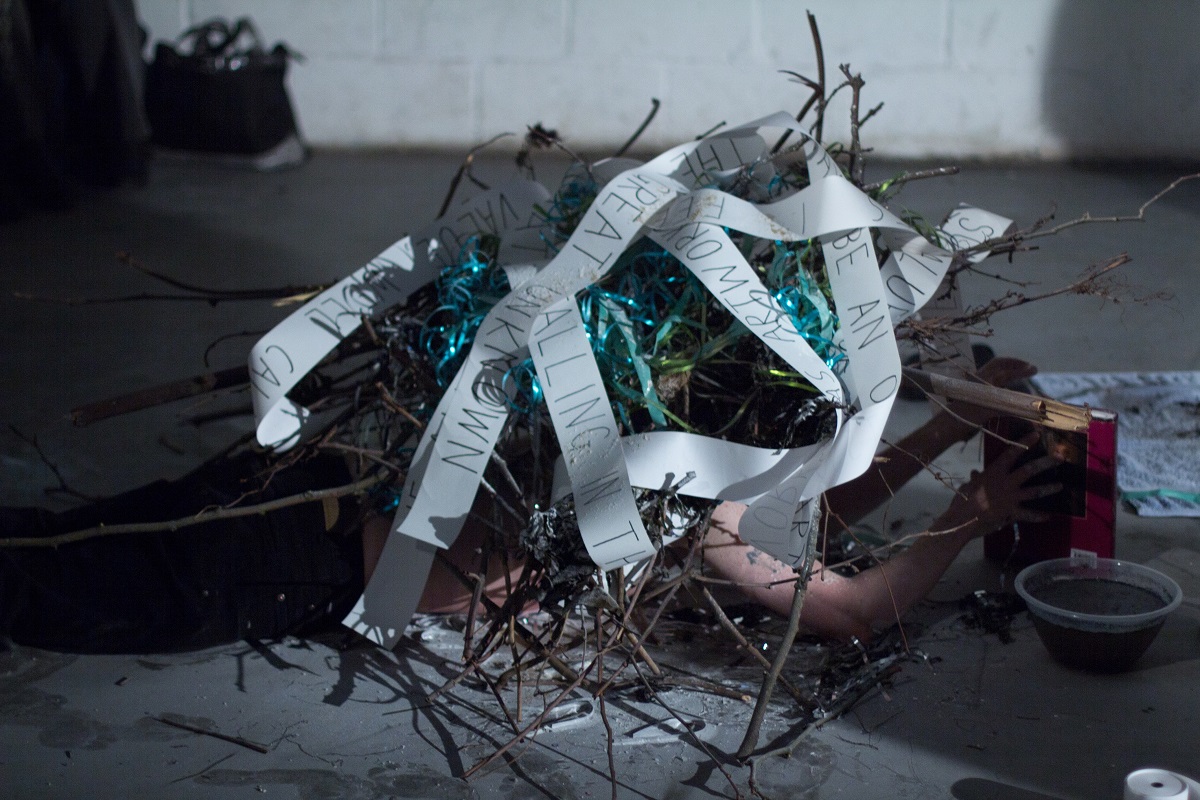 performed for “This Is Where I Am”, curated by Poppy Jackson and Josephine Were, ]performance space[, London, 21st May 2013.

Last year, for a while, I started to feel old. I read a book by Philip Sohm, “The Artist Grows Old: The Aging Of Art And Artists In Italy, 1500-1800”. I wrote my name on the inside cover and added my age beneath it, and only after several days crossed out 35 and revised it down to 34 when I realised that I had myself down for older than I really was. It was only a couple of months before turning 30 that I really felt like a full adult, but at 34 I felt almost ancient. And I had a little bit of an artistic crisis, I started to think: I have been making art for a while now, I have got quite good at it, but I remain as obscure and unknown as ever. This started to bother me a bit. One evening I wrote a gloomy joke about my limbo - “SOMETIMES I FEEL LIKE THAT TREE FALLING IN THE FOREST”. I started to compose further slogans in the same vein - “WHEN THE VALUE OF MY ARTWORKS AS ARTWORKS EXCEEDS THEIR SCRAP VALUE, WE'LL CALL THAT PROGRESS”, “IF ALL ELSE FAILS, I CAN ALWAYS BE AN OUTSIDER ARTIST”, “THE GREAT UNKNOWN” - with the idea of perhaps collecting them all in a book, to be entitled “ARTISTIC CRISIS”. I never made the book (the project seemed possibly unhealthy), and of course I soon pulled free of my pessimistic state. When I really did turn 35, in October, I felt positively young again, I felt girlish! And come New Year's Eve I still felt the same way and made a book about that, with diagrams, “FEELING GIRLISH”. But thinking back to that other book that I never did make, I continued to feel an affection for the project and wanted to realise it in some way. So I decided to remake the unmade book as a performance. I'm not quite sure if the performance was intended as an exorcism or as an apotheosis. Probably both.

“This Is Where I Am” was an event with eleven separate, simultaneous performances, in and around ]performance space[, with a set duration of 90 minutes. Mine was one of the six indoor performances, the other five being around the edges of the room and mine in the middle.

I first of all made paper scrolls of the four slogans mentioned above. I had the upturned plastic bowl on top of the Philip Sohm book to rest on, which looked very nice. That done, I took the bowl over to the sink and brought it back full of water. I took out the dry pieces of seaweed, rehydrated them in the water, and laid them out on the towel. Then I cut the emptied bag into ribbon-like strips. I enfolded the charcoal in the white cloth and crushed it with the stone, tipped the black dust into the bowl of water, and stirred it together with the fringe squawker. I also mixed in the lime-scented bath salts. I took the table skirt and chopped it with the scissors into separate silver strands. I unspooled the green and turquoise ribbons, pulling them gently out from the inside with my fingertips.

I opened up the book and squeezed onto a double-page the entire tub of baby powder, and on top of that I emptied out the sequins and the silver and blue glitter – quite a mound of stuff on the open book. Then I made a pause, I opened the bottle of beer and poured myself out a glass. I had thought, why not for once rather than turning it black and pouring it over myself, try just drinking a little beer in a normal fashion in the middle of a performance? And I would take the opportunity to pause and take stock of how the performance was going. So I did that, and then I went outside to collect the branches I had stowed there beforehand, and brought them in.

I now arranged the branches into a pyre and set about dressing the pyre. I draped the seaweed, the ribbons, the table skirt ribbons, and the F&M bag ribbons over the branches. Then I took the book and blew the sequins, the glitter, and the baby powder from it to cascade in clouds over the pyre. Then I scattered over the narcissus-scented bath salts (subtle reference: the second chapter of “The Artist Grows Old” is entitled “Narcissus Grows Old”). Next I draped the four scrolls over the pyre, and then I threw clouds of the expensive talc over it, and finally I threw on the gold glitter.

I stood the book up beside the pyre, and placed the bowl of blackened water beside the book. Then I removed my t-shirt and crawled beneath the pyre. I lay face down, reached forwards for the bowl, and tipped the black water through the pyre and onto the back of my neck. I turned over onto my back and remained lying beneath the wet pyre, holding my position until the 90 minutes were up. I tried to watch the other performances, but couldn't see a lot from under there. Because I had gone through the opening stages nice and slowly, I didn't have to lie there too long – maybe half an hour or so. And just as I was beginning to feel cold, the shutter doors were winched up to signal the end of the allotted time. I stood up and took an armful of branches and carried them outside into the yard where some people were starting a bonfire, and I threw the branches onto the fire and I threw the scrolls on too.