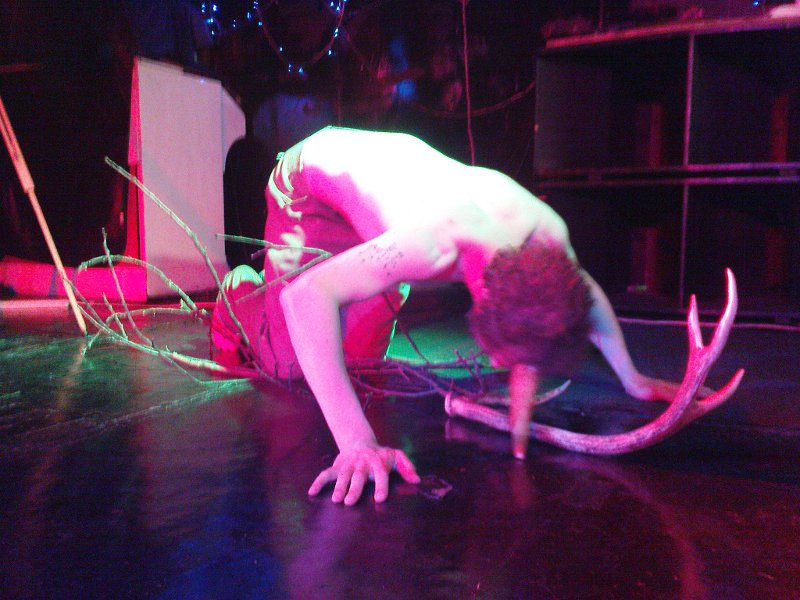 For this performance I played at being an animal, with a horn strapped to my forehead.

I brought a selection of materials out onto the stage slowly, and slowly took off my shoes, socks, and shirt.

I brought on an antler, wearing it around my torso, and placed it at the edge of a sparse nest of antler-like branches.

I dragged my body over to where I had placed a bowl, water, bar of soap, and sponge, and drank water from the bowl. I opened a bar of Roger et Gallet vetiver soap with my teeth and washed my horn thoroughly, unhurriedly.

I rested for a moment, on my side, with my face and horn against the antler’s curve.

I then removed the horn from my head, and removed the wire strap and foam padding from the horn. I filled the horn with water and drank from it. The water tasted incredibly good out of the horn and I drew out this step with repetitions since it was so enjoyable.

I lay back in the nest of branches, soaked up spongefuls of soapy water from the bowl, and squeezed them out attempting to catch it all in my mouth.

I climbed beneath the branches, wiped the soap from my eyes on the antler, held the antler aloft in the crook of my neck and shoulder like a wing, and shuffled off to the wings.

I covered myself in the black blanket that had hidden all of my materials at the beginning, with just my feet sticking out onto the stage. I thought I would lie still for a few moments and let people look at the leftover materials strewn over the stage. I found it quite wonderful lying there still and quiet under the blanket after doing such pleasant things, and so I stayed there and the audience stayed silent and allowed me to stay there for a long three minutes before cheers and applause signalled the end. (It later turned out that the silence had not been wholly sympathetic but was in part embarrassed and sullen, but some of it at least was approving, and all in all it was a pretty good silence for a pub.)

My plans for this performance had been hatched almost exclusively at work, as an invigilator at the Royal Academy, in the dream-come-true scenario of a Lucas Cranach retrospective, with “Apollo and Diana” (1526) as a constant reference. In that painting Diana sits bare-bummed on the soft pelt of a deer, one hand holding onto one of its antlers in affectionate languor, the other playing exquisitely with her own foot in the most complicated tangle of fingers and toes. I made several studies in my notebook on the day before my performance as a kind of last-minute revision, and in the performance I tried to put into practice, in a different medium, all I had learned from Cranach about how to portray keen touch. I had realized, through the luxury of spending hours and hours with those paintings, that this is what I love most about Cranach – the way he can show bodies as not merely things to be looked at, but things that can feel for themselves. Certainly from the 1520s onwards, there is so often such an arching of fingers and twisting of toes, such irresistible stretching of the extremities that you can’t help but follow the ripple of nerves flow right through these bodies, and so they come alive. That’s what makes a Cranach nude sexy, and that’s why the often preposterous anatomy becomes scarcely here nor there, since it’s all about nerve endings and the feel of water and light on the skin.

I was also thinking of another thing I like in Cranach (though not exclusive to him), the fantasy of mythological beings living in forests and yet looking as though they had just stepped out of beauty salons, immaculately groomed, never stinking, legs silky smooth but with never a razor in sight. That is a wonderful dream, and I was definitely referencing that by washing my horn with expensive soap rather than my own saliva (which would have been more realistic had I genuinely been playing at being animal). I was in fact quite careful on this point – one of my fellow invigilators in the Cranach show was a French girl called Noëmie, and I checked with her that Roger et Gallet really was an upmarket brand and not merely something marketed as such to gullible English people on the grounds of its being French.

The whole area of bathing, I may as well record here, is of great interest to me as falling right at the intersection of human and animal experience: grooming being a fundamental action common to all creatures, but at the same time supporting in humans entire industries of baroque refinements in the form of lotions, ointments, perfumes, and all of the lovely packets, boxes, wrappers these things arrive in.

Photographs, video stills, and preparatory sketches for this performance are included in the Young Mountains book “The Disciples Of Lucas Cranach”, published in 2009 in an edition of 50 hardback copies. In October 2009 I curated, with Nicole Mollett, a show of the same title at Utrophia, and made a sculpture for it called “Diana Bathing” (see OTHER WORKS). This was originally going to be a recreation of the leftover arrangement of materials from “Antlers”, but developed into something else, retaining the antler, horn and harness, bowl of soapy water and discarded soap wrapper, dismissing other elements and replacing them with red silk, burnt nails, extra soaps, a different kind of branch, and at the last minute pieces of imitation gold leaf. I had two tips of the antler poking into the soapy water in my best attempt to emulate the exquisite touch of Diana playing with her toes. I was very pleased with that. One day going down to the gallery I found that the antler had been lifted from the soapy water and was now lying against the length of the branch. The Utrophia people told me that a man had been in, moved it when no-one was looking, and had then confessed to them, saying that he had just got back from the forest and that an antler belongs on the branch, not in the soap.