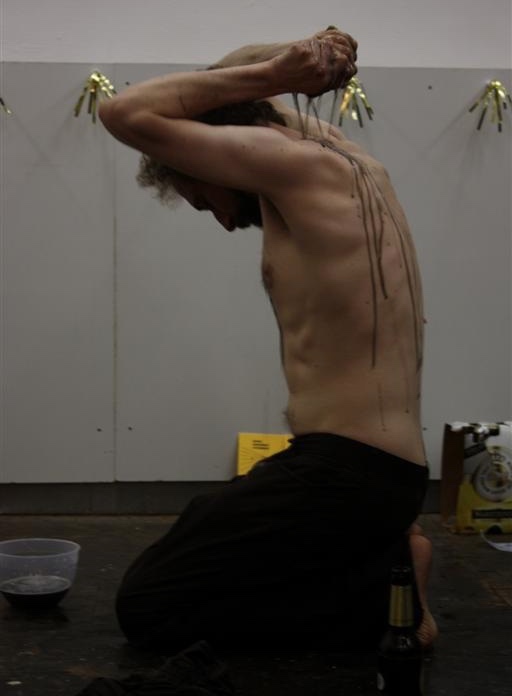 The invitation to make this performance came several months ahead of the event, and I used the time to slowly develop something whereby I was able to consciously understand what I was trying to do to a much greater extent than is usually the case. It was, then, a piece about slippage and spillage between opposing categories, about secret sympathies between contradictory impulses, about things becoming their opposites. I tried to set in perpetual motion an irresolvable circle of ideas around cleaning, penance, and celebration.

I had already made a small sculpture called “Super Absorbent Atonement” (see OTHER WORKS) and decided to make a performance version of the same. The sculpture was a square of four ‘Vileda Sunsplash’ all-purpose cleaning cloths (a gorgeous sunshine yellow) laid out on the floor, upon them a small tangle of bare twigs, and also a sponge, canister of repair & relief balm, canister of stain remover, and scourge-like fringe squawkers. The performance was better than the sculpture.

I made a booklet explaining the performance in words and pictures. The words were all in German, which I love but can’t speak, I just did my best with a dictionary. Anyway, I know that when I do try to explain my ideas in words in English, I always end up strangling the sense of what I was trying to say, so I thought that perhaps I might in fact stand more chance of success gabbling in a foreign tongue and waving my arms around, as it were (i.e., on the page, drawing lots of forceful arrows).

I went first to Paris to visit my friend Laure, and then on to Berlin to rendezvous with the curator Ąlvaro and the other artists for the performance event. We drove down to Halle (a couple hours south-west from Berlin) through a really massive storm, we could barely see a thing out the front of the car for a while. Berlin had been warm and sunny, but Halle was cold and grey. One got the feeling somehow that it was always cold and grey there. It was certainly quite a strange place. Some of the buildings, the old ones, were very pretty, but they were perpetually being hidden behind big blocky ugly communist-era buildings. There seemed to be no planning in it at all, it was as though the newer buildings had been put down entirely at random. It was almost like there had been two separate town plans drawn out on separate sheets of transparent paper, and the two had been placed one on top of the other, and then the whole thing had just been built like that according to whatever chance juxtapositions and superimpositions happened out of it. The art school however, which I visited, was fantastic – twenty yards away you wouldn’t know it was there, hidden behind other buildings, but when you got to it you found it had been set up in a wonderful old castle with a fine central courtyard and, on one side, a really magnificent high wall of natural rock. And we had a nice place in which to stay, in the home of some very nice people, a skateboarding tattoo-artist Hans and a heavily-pregnant ceramicist Frida.

The occasion for the performance was an exhibition called “Heureka!” consisting of a weeklong performance by Susanne Hopmann, lithographic prints on the walls by Ąlvaro Terrones, and an evening of performances from flown-in artists (Sara Coutinho, Xavier Alcącer, Santiago Lopez, and me), and finally a breakfast with everyone. On the morning before the performance event we were all (except for the durationally-performing Susi) interviewed on the local radio station. This was enormous fun, I liked it very much. We did it in a mixture of German, English, and Spanish, possibly some Catalan too. In the afternoon, back at Frida’s and Hans’ house, two girls from the university showed up and said that they had been sent to cook for us. They cooked for hours and hours, and by the time everything was ready we were really supposed to be getting up to the gallery to set things up. The others indeed departed, but I felt very bad that the two girls had worked so hard and then we were spurning their meal (in actual fact we had all already eaten, not knowing they were coming), so I stayed to eat (actually that seemed like a much more enticing thing to me than sitting around in a cold gallery getting nervous ahead of a performance), and so it was the two of them, and me, and Frida and Hans, and Susi who had finished her epic performance and come to join us. I liked that everyone around the table apart from me was German, and the food was great, especially the soup, a really amazing beetroot soup.

I got to the gallery just as it was opening for the evening, and found that the spot I had intended to make my performance in was no longer available, the DJ for the afterparty had set up his stuff there. For some moments I thought it was a disaster – the only real alternative place for me would be in front of a row of Ąlvaro’s prints of Angela Merkel, portraying the Chancellor in pin-up pose, tattooed and suckling a bull at her breast. I thought, I can’t make my performance in front of those, but then I realised yes of course I can and it will be great – I don’t know enough about German politics to know exactly what my actions would mean in front of such a backdrop, but they may well mean something for the locals and perhaps that will be good... And then I saw that, with her elbow lifted high and back, Angela Merkel in the lithographs looked almost like she was scourging herself – so really it fit quite perfectly.

Lots of people came to see the performances, mostly I think they were students from the university. Apparently performance art is quite a rare thing in Halle, so people were interested to come and see. Sara went first, then me, then Xavi, then Santi. The four performances were each quite different from the others, but worked well together. I liked all of them.

I put up on the wall, below the Merkels, a couple of posters I had made, with the title of my piece, and then I put up a row of golden fringe squawkers (the sculpture “Scourges (Golden Scourges)”). I scattered copies of the explanatory booklet about, delineating a kind of stage for myself. I placed my other materials into position. I made a quotation of the exhibition poster – Ąlvaro had designed a great poster for the show, with the image of a fish walking on two legs, defiantly in socks and sandals – it so happens that I own a bottle opener in the form of a fish which greatly resembles the one on Ąlvaro’s poster, so I had brought that with me and I walked it over, with my right forefinger and index finger acting out the legs, me clanking along behind on knees and one elbow, towards a six-pack of beers (“Warsteiner”, a beer golden in colour and with packaging in the appropriate yellow, black, & white). I opened a beer, poured it into a plastic bowl, drank a little, and started to clean the floor. I squeezed out some cleaning fluid (“Frosch” brand), and began working it with “Vileda Sunsplash” cloths into the wooden floor, quite reasonably at first, then getting more prostrate, belly on the ground and feet in the air, pushing the cloth with my head (this bit didn’t come off so well, I couldn’t make it slide along properly with my head), and finally taking the t-shirt off my back and using that to scrub the floor with, all the while taking drinks in between from the bowl. Now I poured a second beer into the bowl, and discreetly took a small pan of black watercolour paint from my trouser pocket and into my hand. I plunged both hands into the bowl and washed them in there, meanwhile rubbing my thumb into the watercolour pan so that the beer gradually turned black. Next I took one of the fringe squawkers from the wall, dipped it in the blackened beer, and began to flagellate myself on the back with it, causing little rivulets of black to run down me. I did this with three or four of the fringe squawkers, kneeling, or standing, or walking up and down. Then I took one of the cloths, dipped it in the bowl of blackened beer, and squeezed the juice of cleaning fluid/watercolour/beer out over my shoulders, and then I lay down on my back and did the same over my chest, and then I just lay awhile, breathing, amongst all the mess gradually built up. Then I put on a clean shirt, opened up a clean beer, and, drinking from the bottle, rejoined the audience.

The DJ that played songs after the performances turned out to be great, playing lots of barely not even music things... At the Frühstück the next day Sara and I looked through his crates and found many awesome sleeves, the best to my eyes being a 7” entitled “Acoustic Penis Convention” – indeed, some of the sides the DJ had been spinning had sounded much like a tape-recorder being dragged over penises, though I’m not sure if that was that or not. The sun, also, came out that day, the Saturday. Then on Sunday, by train, I left Halle.